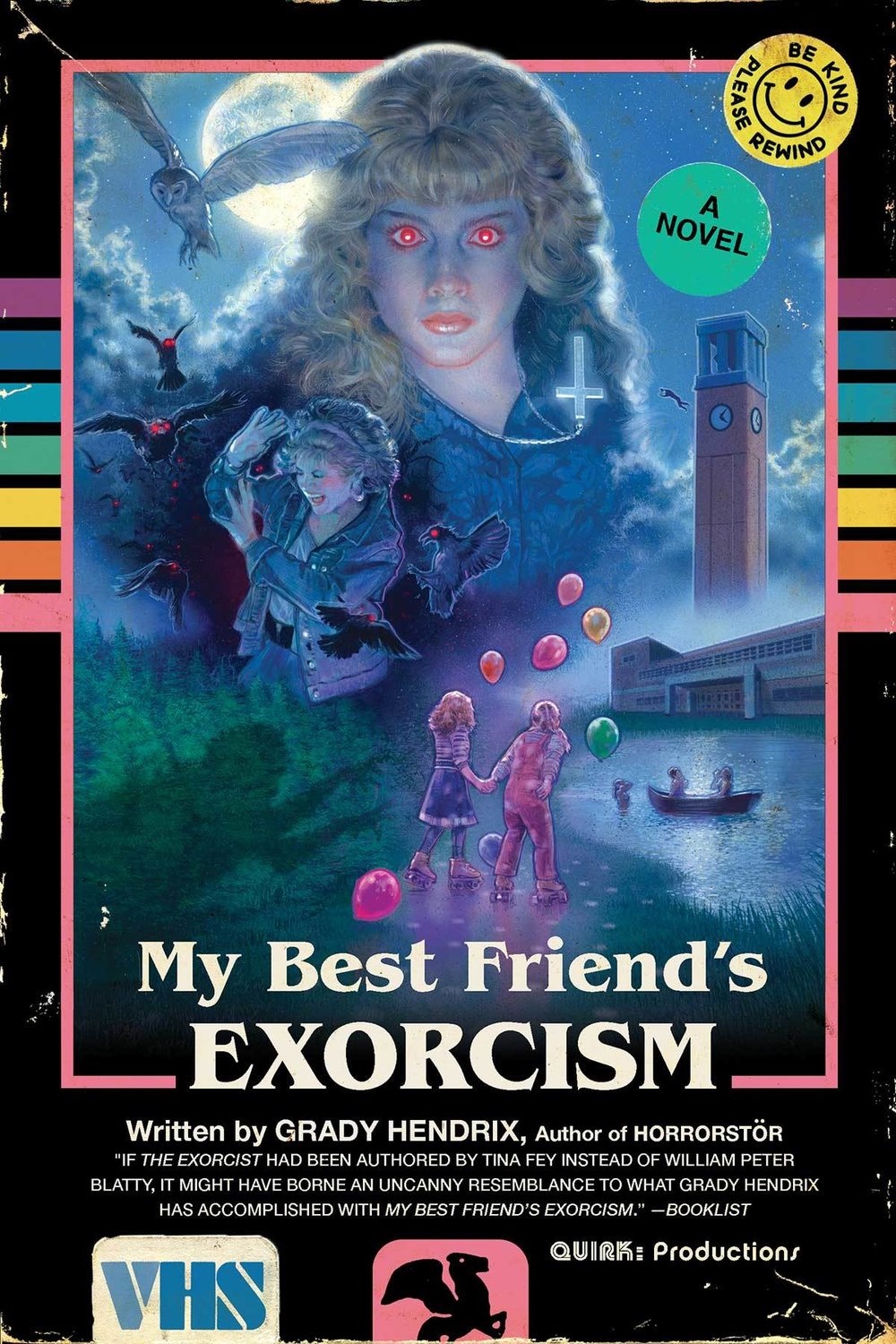 Blood Beats is a new series examining the intersection of music and horror. Different authors take a closer look at authors, artists, albums, and songs taking inspiration from the genre we celebrate, and at books and movies deeply influenced by music. We hope to give some additional exposure to these books, films, and bands – and to give you some new favorites for your playlist.

Have you heard the one about the metal band that made a deal with the Devil? What about the one with the haunted IKEA store? Genre fans will likely be familiar with Grady Hendrix and his work. But in case you’re not, prepare yourself for a fun and wild ride.

Need a breezy summer read that just happens to feature demonic possession? Pick up My Best Friend’s Exorcism. Feeling like some nonfiction? Peruse the pages of Paperbacks from Hell, an in-depth exploration of the mass market horror fiction boom of the 1970s and 80s. Out of room for band patches on your battle vest? Read about Dürt Würk and their lost album Troglodyte in We Sold Our Souls.

Whether you want truth or fiction, Hendrix’s books are eminently readable and suffused with style to spare. They’re scary, fun, and downright addictive—the kinds of books that have you staying up much later than you should so that you can finish just one more chapter, then one more after that. And, appropriate for Blood Beats, music weaves deftly into the fabric of these tales.

Hendrix has also created stories and screenplays for films. He has worked with Ted Geoghegan on 2017’s Mohawk, and on Satanic Panic, which is currently on the festival circuit. I recently had the opportunity to chat with Grady about his influences, his work, and some of what we can expect in the future.

Earlier this year, I read an interview where you mentioned growing up in a very Christian household. This wasn’t altogether surprising to me, since I had a similar experience growing up as the son of a Baptist preacher. Many of these things that we now have an interest in—scary movies, books about evil forces, music by bands with misplaced umlauts and sinister reputations—were forbidden fruits. What do you think it is about things taboo that draw us in? Were certain types of movies and music off-limits to you when you were growing up?

My family wasn’t evangelical but we were very involved with our church. However, it was a Presbyterian church which is pretty non-threatening. I mean, if you want to burn some albums or ban some movies there are other denominations to try, but if you want to form a committee then Presbyterians have got you covered. My parents let me read almost anything but I couldn’t watch R-rated movies, which meant I read about them in Fangoria or I read the Marvel comic adaptation and then pretended I’d seen them to my friends.

But going to Sunday school and church every Sunday for years does make you comfortable with the supernatural, or at least it worked that way for me. I mean, I can’t tell you how many times I read the Book of Revelations as a kid and that’s great inspiration.

I found out about your novels thanks to a hearty recommendation from the hosts of Shock Waves, and rapidly tore through My Best Friend’s Exorcism, then Horrorstör, and most recently We Sold Our Souls. Each of these books include heavy doses of both music and the Devil (or his assorted minions). Having grown up in the 80s, I can vividly recall the era of Satanic Panic and burning of records. Was this part of your experience too, and if so, how has it impacted your approach to storytelling?

I didn’t encounter it directly, but I remember reading about the Satanic Panic as it unfolded and it terrified me. Not so much the idea that there were Satanists lurking out there who wanted to steal my immortal soul and get me addicted to PCP, but the idea that this was obviously BS and yet all these cops, lawyers, newspaper editors, news producers, and judges believed it. Suddenly the world felt like no one was in charge and the people in power were dangerously dumb.

Death, Dying, And Other Things Episode 47: The Ghosts Of The World, Part 2

Read More
Death, Dying, And Other Things Episode 47: The Ghosts Of The World, Part 2

Death, Dying, and Other Things Episode 32: Things You Were Never Meant to H...

Read More
Death, Dying, and Other Things Episode 32: Things You Were Never Meant to Hear
Submit a Comment