Chasing the clues to ‘Climax’

In discussing his new film, Gaspar Noé has likened the dizzying, dazzling Climax to films in the giallo genre. What Climax lacks in stalking, black-gloved killers, it more than makes up for in tantalizing clues sprinkled throughout its runtime, including a few red herrings. Astute and eagle-eyed viewers may be able to discover on first watch who laced the sangria that caused the party to descend to infernal chaos, but I’ll admit that it wasn’t until my second and third viewing that I started to connect all the dots.

Part of the brilliance of Noé’s film is that the viewer gets so caught up in the hallucinatory hedonism on display that things we should be paying close attention to get lost in the rush of bodies, dance, music, and a tableau of visuals both beautiful and repellent. The film’s final shot brings everything you’ve seen in the preceding minutes into sharp focus. In subsequent viewings (I’ve since seen the film five more times), it became clearer how, just like the best gialli, Climax has enough clues for the audience to solve its central mystery.

But it’s not just The Case of the Spiked Sangria whose clues litter the film. There is a pivotal scene early on in Climax (which also featured prominently in trailers before its release) that can provide insight into the influences of the film and its creator while also introducing many of the characters populating the world of the film.

The scene in question plays out in a fairly long static shot, quite unusual in a Gaspar Noé movie. In the center of the frame is an old standard definition television sitting on a shelf, framed on both sides by books and videocassettes, the latter housed in both cardboard sleeves and clamshells. When I first saw Climax as a midnight screening at Fantastic Fest (after returning to Austin on an early-morning flight after a three-day run of concerts in Colorado), my eyes and mind both raced across the screen trying to take in as much of the image as possible in hopes of identifying the books and tapes, but hopelessly unable to register everything I was seeing. Each subsequent time I saw the trailer, I’d quickly scan the frame. And when I received my copy of the UK Blu-ray, I paused the scene and was able to take in much more of the shelves’ contents.

If you couldn’t dance, what would you do?

In an interview included on the Blu-ray, Noé mentions that the books and films included in this scene were items that he had in his collection when he was in his mid-twenties, and that in some way influenced the film and his approach to filmmaking. The effects of these influences can be felt to greater or lesser degrees, but they all fed into the stream of thought and inspiration that resulted in Climax, which may very well be Gaspar Noé’s most accomplished film to date.

Because they typically have larger (and often more lurid) fonts than their literary counterparts, the VHS tapes are for the most part easier to identify. Some of the movies included are George Romero’s Dawn of the Dead (under its European title, Zombie), Pier Paolo Pasolini’s Salò, or the 120 Days of Sodom, Andrzej Zulawski’s Possession, Dario Argento’s Suspiria, Kenneth Anger’s The Inauguration of the Pleasure Dome, and Luis Buñuel and Salvador Dali’s surrealistic short Un Chien Andalou. These films in particular point toward some of the themes at play in Climax – hedonism, loss, feelings of isolation (even when surrounded by those we’re supposed to be close to), the fears associated with pregnancy and parenthood, and ultimately the cruelty that we inflict upon ourselves, and on each other. All of these themes play out across the screen in a mixture of throbbing dance music, kinetic camerawork, and images that are alternately breathtaking and horrifying. Many of the films on the shelf have heady and thought-provoking themes; they also are memorable for their usage of sound, cinematography, and transgressive imagery – elements to which Noé is no stranger.

Numerous books also line the shelves, some with their names printed so small as to be difficult to read, but again there are several titles that stand out, and one can easily draw parallels between these works and those of Gaspar Noé. The two which first caught my eye were Oscar Wilde’s De Profundis, and Friedrich Nietzsche’s Beyond Good and Evil. De Profundis was written while Wilde was imprisoned after being convicted of gross indecency stemming from his relationship with Lord Alfred Douglas. Much like Climax itself, De Profundis is delineated into two distinct parts – the first being an examination of his affair with Douglas, and the latter using Christian imagery to examine his personal growth during his time spent in prison. Beyond Good and Evil serves as a polemic against a number of cultural, moral, and social norms, and that in order for individuals and societies to reach their full potential that many of this structures had to be left behind. Also glimpsed are Carlos Castaneda’s L’Herbe du Diable, which touches on the psychedelic properties of various plants and teachings supposedly gained from Don Juan Matus, a translation of Patty Hearst’s autobiography entitled Mon Voyage en Enfer, literally meaning My Journey to Hell, and a book of collected art from the transgressive French photographer and artist Pierre Molinier entitled Un Vie d’Enfer (A Life of Hell). There are books on the films of Fritz Lang, and on Scorsese’s Taxi Driver.

Take the trip, and see where the trip takes you.

Artists, filmmakers, libertines, mystics, philosophers, surrealists – their works are all clues to the influences on and the story within Gaspar Noé’s Climax, and they are all on full display in an unmoving shot that lasts close to seven minutes. All the while, interviews play on the outdated television, introducing us to the characters who will accompany us on this journey into hell as they also provide their own clues about what we are about to witness.

Climax takes everything we have previously seen from Noé as artist and filmmaker and distills it into its purest essence, culminating in a 96-minute hallucination of hedonism, heaven, and hell. Follow the clues. Take the trip, and see where the trip takes you. 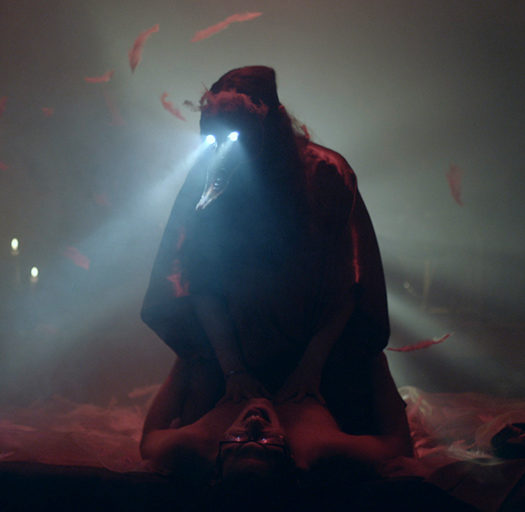