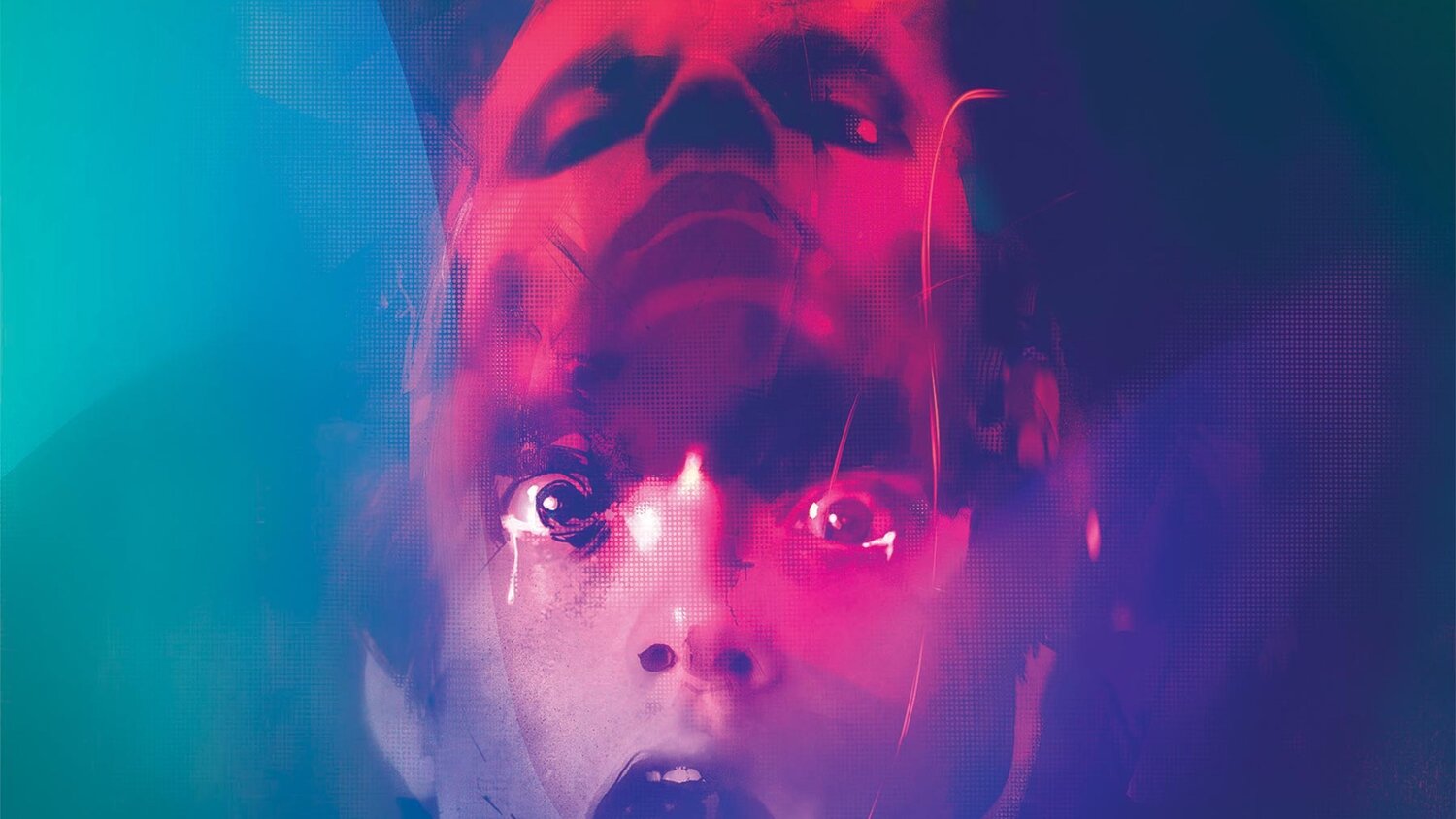 Daniel Isn’t Real marks the second feature collaboration between writer/director Adam Egypt Mortimer and his co-writer Brian DeLeeuw. Like much of SpectreVision’s recent output, Daniel is a disturbing and psychedelic odyssey featuring striking effects and powerful performances. Mortimer and his talented cast and crew have crafted a tense and hypnotic slice of darkness that ranks among the year’s best horror films.

The film begins with a brief, trippy title sequence before a lingering glimpse of some sort of hallucinogenic abyssal storm. Following this prelude, our senses are immediately battered by a pair of disturbing scenes. In the first, a typical afternoon in a cafe is disrupted by violence. An armed man walks in and begins killing indiscriminately. From this scene, we watch as a married couple argues viciously, their young child witnessing it all.

“At first, Daniel seems much like a benevolent Tyler Durden.”

This child is our protagonist, Luke. Not wanting to see his parents fight, Luke slips out of the house with his stuffed animal. On his way to the park, Luke passes the scene of the crime. The gunman is dead, covered in blood. Luke stares at the carnage before another young child greets him and accompanies him to the park. This is our introduction to Daniel. The young boys spend some time playing in the park, lost in a make-believe world. When Luke’s mother Claire (Mary Stuart Masterson) finds him, it’s made clear that she can’t see Daniel. Claire believes, like any mother would, that her son has an imaginary friend.

In montage, we see the boys playing. Luke’s imagination transforms the ordinary world into someplace magical. His house is a castle, a broom is a sword, and his new friend is playmate, confidant, and mentor. But soon we see a darkness hiding in Daniel. Daniel instructs Luke on how to access his mother’s medication. Daniel tells Luke that the pills will give his mother superpowers and directs the trusting youth to put the medication into a shake his mother is making in the blender.

“…we start to see Daniel’s dark side emerge again.”

Claire barely avoids death, and is adamant that Luke put an end to his relationship with his imaginary friend. Though Luke is hesitant, he follows his mother’s advice. Luke locks Daniel away in his grandmother’s dollhouse and hides the key.

From here, we flash forward about twelve years. Luke (Miles Robbins, Halloween 2018) is in college, living on campus with a douche-bro roommate. His mother’s mental health has continued to deteriorate, and Luke is worried about his own health and sanity. He attends a party, but the stress and anxiety cause him to unexpectedly pass out. Upon regaining consciousness, Luke witnesses frightening visions. These events drive him to seek help for a therapist, though Luke knows his mother wouldn’t approve. Luke’s therapist encourages him to get back in touch with aspects of his self and his imagination which he has been ignoring.

Just like that, Daniel (Patrick Schwarzenegger) gets out of that dollhouse. At first, Daniel seems much like a benevolent Tyler Durden. He helps Luke pass his college exams, get in touch with his more artistic side, be more outgoing and social, and of course, helps him be more confident with women. When Luke passes out at a party, we start to see Daniel’s dark side emerge again. He takes a straight razor to Luke’s throat, only removing it when Luke begins to stir out of his drunken stupor.

“… an exhilarating ride through dark and mind-bending sex and violence.”

At roughly the halfway point, Daniel Isn’t Real brings in some unexpected and impressive body horror elements. And while I won’t say too much here, the film doesn’t play too coy with the “is he or isn’t he real?” aspects of its storytelling. Mortimer and DeLeeuw wisely choose to come down on one side of that dual possibility, and the film works better for the decision. The second half of Daniel Isn’t Real is an exhilarating ride through dark and mind-bending sex and violence. The film can proudly stand aside Mandy and Color Out of Space as another dark and trippy gem in SpectreVision’s crown. It also leaves me exponentially more excited for Adam Egypt Mortimer’s upcoming film Archenemy, as well as wanting to revisit his earlier feature Some Kind of Hate.

Though most of my feelings around Daniel Isn’t Real are positive, I did find a couple of minor complaints with the film. There are a couple of minor effects-driven moments that I didn’t feel completely worked. Most of the effects work is strikingly realized, so that is a minor nitpick. One area where I felt the film could have been improved was its handling of female characters, particularly those to whom Luke finds himself attracted. These characters, Cassie (Sasha Lane) and Sophie (Hannah Marks), feel a little one-dimensional, mostly being relegated to the “love interest” and “damsel in distress” tropes.

Those elements aside, there is much to recommend in Daniel Isn’t Real. The effects work strikes me as a blend of Mandy’s trippy psychedelia and Cronenberg’s body horror. Miles Robbins and Patrick Schwarzenegger both provide strong performances. Robbins shows a wide and nuanced performance while Schwarzenegger mostly deals in shades of menace, but he is extremely effective in the part. The cinematography, by SpectreVision stalwart Lyle Vincent (who also lensed Cooties, The Bad Batch, and Thoroughbreds) is top notch, deftly moving between the mundane and the otherworldly. The score by Clark is appropriately ominous and, at times, reminiscent of the icy soundscapes of Lustmord.

Daniel Isn’t Real may be hitting release near the end of 2019, but it deserves to be seen at your earliest opportunity and will likely find a place on many lists of this year’s best. Mortimer avoids the sophomore slump and delivers another winner for SpectreVision.

Daniel Isn’t Real is a darkly twisted tale tinged with psychedelic visions and surprising outbursts of sex and violence.

Fantastic Fest 2019: ‘Come to Daddy’ is a Quirky and Violent Blend of Giggl...

Read More
Fantastic Fest 2019: ‘Come to Daddy’ is a Quirky and Violent Blend of Giggles and Gore [Review]