When deep, intellectual thematics meet gritty storytelling, you end up with something like Sean Brosnan’s MY FATHER DIE. Based on the 18th century play, “Playboy of the Western World” by Irish playwright John Millington Synge, MY FATHER DIE aims to delve into Freud’s concepts of Id, Ego, and Super Ego.

That’s some deep underlying currents for a movie that has a white-trash facade. Brosnan states that his aim was to create a ” beautifully dirty unapologetic revenge film.” Set in mid 90’s Louisiana, MY FATHER DIE looks anything but apologetic. The film premieres March 12th at SXSW for those of you lucky enough to be attending the festival. Thankfully for the rest of us, we get this sordid trailer!

Synopsis
Deaf and mute since having his hearing knocked out at the age of 12, Asher has been training for almost two decades to avenge himself on Ivan, the man that killed his older brother 21 years ago. Now that his nemesis is out of prison, he gets his chance. But Asher’s target also happens to be his father. 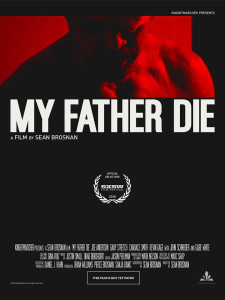 Read More
‘THE PRODIGY’ trailer is every Parent’s nightmare