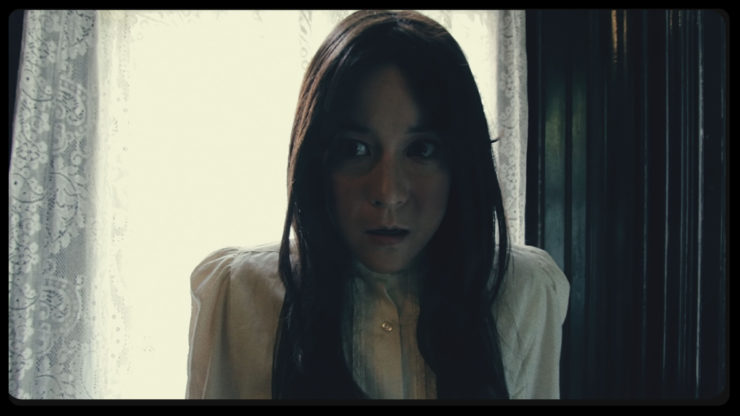 The Insider: H.P. Mendoza and the Not-So-Sudden Success of ‘I AM A GHOST’

I don’t know if it was my blue collar upbringing or if it was the miserable company I kept in school, but I was socialized by my peers to believe that the word “filmmaker” was pretentious. And if you aspired to do anything “artsy”, you were a fucking asshole. In 2011, I was at a swanky launch party for a certain film festival, having a drink with the executive director when a young guy with a half-shaved pompadour and a lanyard full of business cards walks up to us. The front of his badge read “John, Festival Programmer.” The executive director lit up and put his arm around him to face me.

“John,” he said, pointing at me with his cocktail.  “Have you seen I Am a Ghost?”

“Ugh,” he grunted. “I scrubbed through the first ten minutes and was like ‘fuck this artsy bullshit’ and I just skipped the whole film entirely.” I felt the muscles in my mouth involuntarily contort into the Obama “not bad” face.

“Um,” stammered the executive director as he pointed at me with his cocktail. “So, this is H.P. Mendoza. Director of I Am a Ghost.”
Without missing a beat, John raised his glass to me and said, “Cheers.” 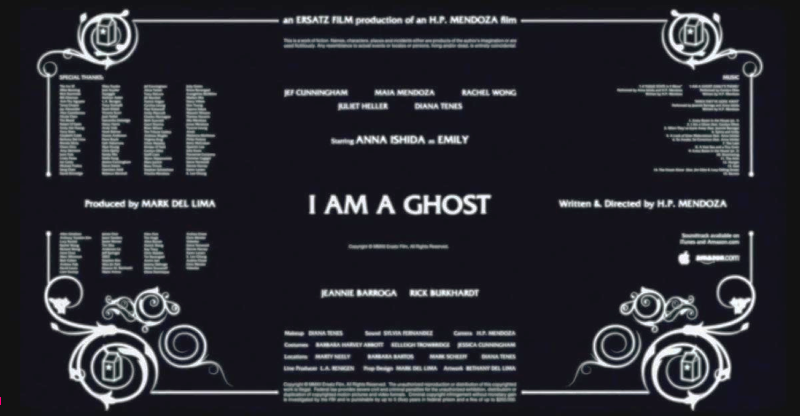 Every credit for I Am a Ghost on a single screen. That’s our “credit sequence”.

I came up with the strange idea of I Am a Ghost when I was talking about hauntings with magician Christian Cagigal, who runs the San Francisco Ghost Hunt. He talked about hauntings possibly being emotional imprints in time, left by the dead, eternally playing in loops. I asked, “If hauntings are imprints in time, shouldn’t the living be able to haunt a house as well?” Christian shrugged. My mind was going a million miles a minute, imagining a super noisy experimental film in which we only see hazy, muddy fragments of a dead woman’s life, repeating in odd and frustrating ways until the memories reshuffle themselves into an order that reveals who her murderer was. And when I ran the idea past Christian, he responded with, “Sounds cool. But don’t expect a lot of people to see it.” Fair enough. He was probably right about the public not wanting to watch a movie that looked like a scrambled cable channel. But I really wanted to do something truly weird. Oh shit: does that mean…”artsy”? Am I being a…”filmmaker”?

The obnoxious erudite in me wanted a ghost story by way of Maya Derren, Chantal Akerman and Ingmar Bergman. But the prosaic college dropout in me wanted to pay homage to Hitchcock and Spielberg, with touches of James Cameron and even one of my favorite games as a child, Sinistar. I wrote the first 80 page draft of I Am a Ghost and kept it under my bed with the rest of my scripts. (I used to actually keep them under my bed; now I just have a Dropbox folder called “Bed”.) But I wanted to run the idea past a filmmaker whose early art films I admired. When I pitched the idea of the film to him, he said, “It’s really good. If you were to pitch this to me about 20 years ago, I would have jumped on it. But these days I’m really focusing on making movies that make money. If you want to make a movie that makes money, I’ll work with you.” I apologized for wasting his time, to which he responded with “Hey. Always ask.”

I figured that this would be the experimental script that I would someday get funded. Like, after I “get all famous and stuff”. Because, you know, who would fund this difficult script written by a guy with only a gay musical under his belt? I met with Julia Kwan, director of Eve and the Firehorse, after my directorial debut, Fruit Fly (the gay musical), had finished its theatrical run. She asked me what my next film was going to be and I chirped “a political comedy about marriage equality!” Non-plussed, she asked if I had any horror movies in the works and I told her, in detail, all about my pie-in-the-sky idea of I Am a Ghost.

Julia nodded. “I think it should be your next film.”

“Julia,” I mansplained, “a film like this will take tons of money and resources and support, all of which I don’t have.”

“When has that stopped you before?”

Rehearsing a trick shot with Anna Ishida (Emily) that requires her to know exactly how the scene will be edited.

We shot the movie on a production budget of $7500 in July of 2011 with a crew of six in a cramped Victorian house in San Francisco. Anna Ishida, who I’d stalked to play the part of Emily, only had seven available days, so those were the days we shot. I’d cut 22 pages of exact dialogue in favor of 8 pages of near silent ambiguity. And knowing that the script wouldn’t make much sense to anyone that wasn’t in my head, I started the first read through by looking at everyone and saying “Trust me.” I am not sure everyone did. The new script read like three short films strung together by a bunch of tweets about a Victorian house. I’d found that the danger of experimenting with my own form is that my initial storyboards looked like a fucking shit show. And yet, I knew that once I got all the visuals and sound in a timeline, it would all make perfect sense.

Our festival premiere was in March of 2012 at the San Francisco International Asian American Film Festival (where Yes, We’re Open, a film I wrote for director Richard Wong, was also premiering). And having done the Asian-American film circuit a few times before, I knew that I had a year’s worth of travel ahead of us. What I did NOT know was how we were going to eventually distribute the film. After all, I had a producer tell me (publicly, at a film festival panel for queer people of color) that “Asian faces just don’t sell”, which rang through my head as I read the decline letter from Sundance. (Interestingly, the first film I wrote was declined by Sundance, yet plays on the Sundance channel regularly.)

Over the festival course of two years, I went through all of the exact same stages I’d gone through before on previous films.

3) “It’s been a year, but we’re still playing in festivals and still winning awards, so we’re still relevant! Right? RIGHT???”

4) “Maybe the filmmakers I thought were supporting me are actually competing with me.”

5) “Screw it, let’s just put it on YouTube for free.”
Ten years ago, I found myself at a film festival drinking with a group of former child stars and one of them drunkenly told me, “They’ll act like your friend, tell you in private that you’re great. But in public, they’ll never promote you. You need representation, not friends.” At the time, I didn’t know who “they” were, but I had a feeling he knew what he was talking about. Yet, I still wanted to believe in the people that I actually considered friends. So at the risk of seeming gauche, I asked director Dave Boyle, whose film Man from Reno had just been picked up, what I should do. His response wasn’t to just tell me what to do; he literally sold I Am a Ghost to his distributor in a single e-mail, championing the film the way he’d been during the entire festival circuit. “Always ask”, indeed.

Opening night of I Am a Ghost at The Castro Theater, San Francisco

I Am a Ghost was released by Gravitas Ventures on March 1, 2014 in all English speaking territories. Over the course of the past two years, we’d slowly rolled into Spain, France, and Belgium and finished our journey with a theatrical release in Japan on March 1, 2016. The website is littered with glorious fan art as well as fan videos and people have been submitting their analyses and interpretations of the movie ever since the day it opened. And with no marketing machine behind us at all, it’s because of horror publications like Modern Horrors that anyone’s seeing the film at all.

I recently woke up to a Facebook notification telling me that a friend tagged me in a post. Holy shit. Buzzfeed listed me as one of 28 Asian-American Filmmakers You Need to Know, specifically singling out I Am a Ghost for being “an inventive microbudget horror movie.” Like. Share. Awesome. Two weeks later, Bloody Disgusting, whose attention I’ve craved for years, listed I Am a Ghost as one of 9 Fresh and Exemplary Indie Shockers, saying that “the film boasts some of the most terrifying moments put to film”. Like. Copy and Paste that whole “terrifying moments” sentence. Share. And then a week later, Buzzfeed put me on a list of 42 Queer Filmmakers You Should Know. Like. No, LOVE. Share. Hashtag it #humblebrag for all the folks who are sick of my posts. It always amazes and warms me that our tiny little arthouse horror film can still be discovered and championed four years after its premiere.

And now, five whole years after shooting I Am a Ghost, it’s time to make a new film. Because I’m a fucking filmmaker. Buzzfeed said so. 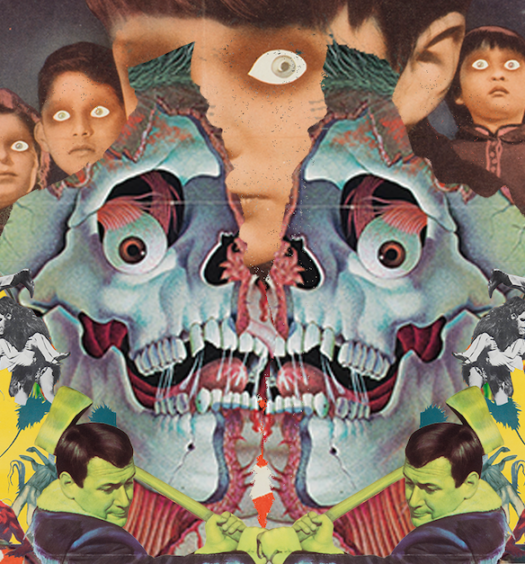