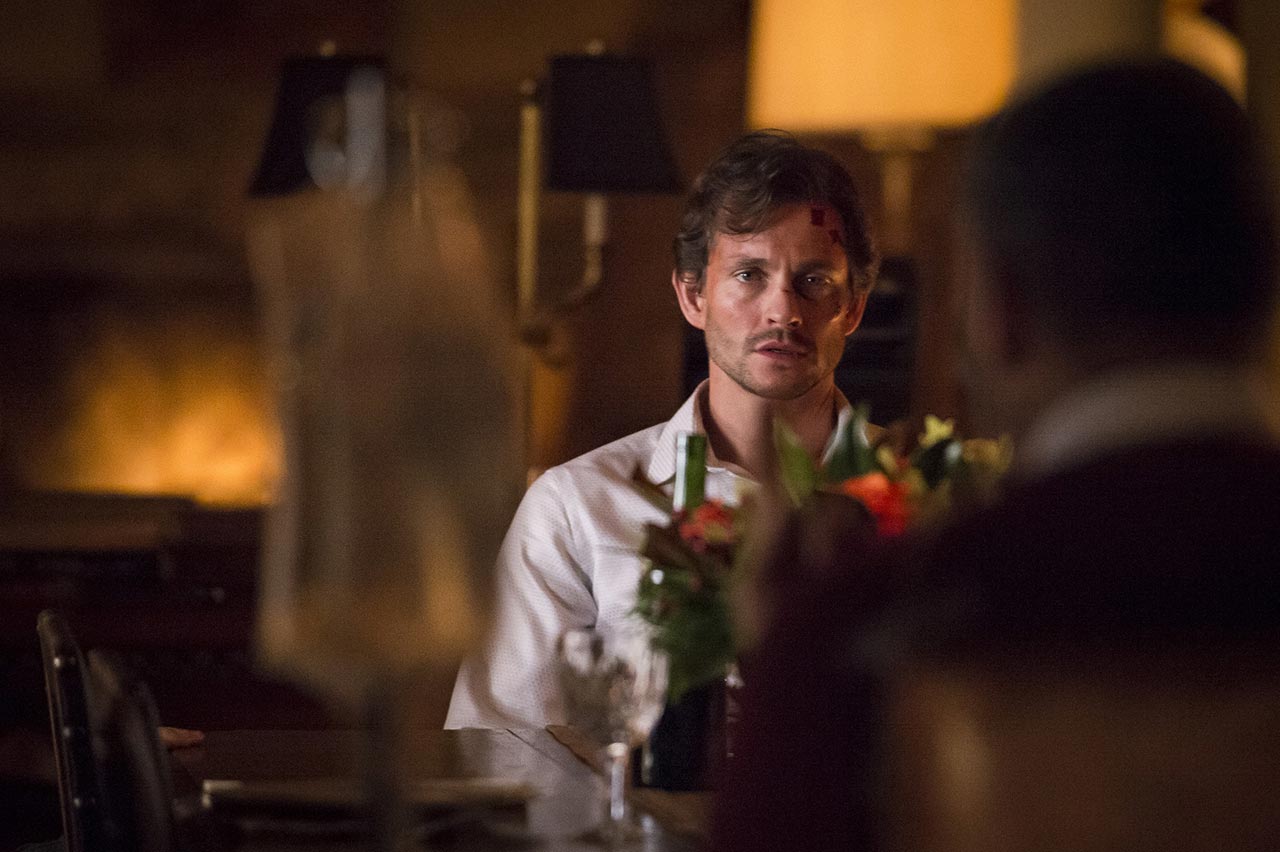 There was a push to appeal to Hulu as well as other networks; rumor has it that Bryan Fuller might be looking towards the UK. In the meantime, our Season Three Italian meal progresses, skipping Insalata and Formaggi et frutta and heading straight for “Dolce,” or dessert. As the show’s food stylist Janice Poon noted, “all the sweet things that would have been on the table at the Last Supper are on the table for Will’s Last Meal.” But Will has to get to the table first.

A bloody and battered Hannibal limps through the streets of Florence. Intercut between this are scenes of Bedelia bathing him, cleaning his wounds, and fixing him up, all the while casting disapproving glances his way. There’s a beautiful edit between Bedelia cutting the surgical thread and the police cutting Pazzi down from the building as Jack watches. Will approaches Jack from behind, and though he has stopped visibly bleeding, like Hannibal he also sports a limp. Twinsies!

They discuss Hannibal’s escape whilst wandering through Lo Studiolo, Jack noting how like Pazzi, they are both “outside the law and alone.” Jack: “Will you slip away with Hannibal?” “Part of me will always want to,” Will muses while studying himself in a pane of glass, a visual reflection of his duality. “You have to cut that part out,” Jack warns. “Why didn’t you kill him?” Will asks. “Maybe I need you to,” retorts Jack.

Hannibal sketches from his balcony, wistfully explaining to Bedelia that these memories will be all he has. “Florence is where I became a man.” After a discussion of how beginnings and endings are much the same, Bedelia packs a bag and advises that “this is where I leave you or more accurately, you leave me.” Some delicious repartee about the potentiality of Bedelia-as-repast ensues and they kiss. “You may make a meal of me yet, Hannibal. But not today.”

Another meal is being prepared but this time it’s not at Hannibal’s hands. Cordell is serving pig’s tails to Mason as practice for one day serving him Hannibal’s fingers. He describes it in almost philosophical terms, leading us to speculate that in another universe, Cordell and Hannibal might have been murder buddies. Mason makes the cannibal pun this time around: “Papa used to always say meat was a people business.” Cordell has an idea. “We could… Peking duck him. You have to torture a duck to prepare it.” Mason positively drools over the idea of Hannibal Lecter glazed in honey and roasted to a crisp, but he’s not alone.

The director asked me if I wanted to work on Mads or if we should get a prosthetic body double. With a heavy heavy heart (sobbing!!!) I said it would be too onerous for Mads to endure being naked, covered in glaze and laid out naked on a table while I drape his nakedness with fruit. So on set, I glaze and garnish the Man-o-Latex instead of the Man-o-Dreams.

Later, Mason watches a news report about Pazzi’s murder (given by one Stella Aquisto of City Toronto news!) He grumbles that he “just paid a lot of money for a dead dago.” Cordell is there, along with Margot and Alana, looking incredible in a fitted suit and a red blouse cut down to there. Margot thinks they need to buy another cop.

Back in Italy, Bedelia retrieves her works from an air vent. She’s tying off when Chiyoh approaches with her trusty rifle. They have much in common, as Chiyoh observes: “I’m his bird, too. He puts us in cages to see what we’ll do.” “Did you watch as the wild beast turned from the teat and entered the world?” Bedelia wonders in another slight alteration of Thomas Harris’s text, this one from Hannibal Rising.

But really, mommy needs her medicine so Chiyoh needs to GTFO. As Bedelia falls into the arms of Morpheus, another Morpheus knocks at the door: Jack Crawford accompanied by Will Graham. Bedelia is high as fuck, acting like a combination of Barbara Stanwyck and Blanche DuBois. She keeps drunkenly denying that she is anyone but Lydia Fell, wife of Roman Fell, no matter how much they press her. In an inversion her line from “Saikizuke,” Will hisses, “I don’t believe you.”

Still, Bedelia is conscious enough to know why the cops are taking so long to arrest her “husband.” Jack: “They’re being bought.” Suddenly Will has disappeared. Back at Muskrat Farms, Margot tells Mason much the same: “I made new friends in Italy.” Mason wants to talk about “what Margot wants” and tries to coax her to “sit on Santa’s lap.” She is having none of it and reminds him what she wants. Mason wants that, too. Sort of. “Our own baby, yours and mine,” he growls. When Margot reminds him she no longer has the ability to make that a reality thanks to his surgical machinations, he plays blame the victim: “You weaponized your uterus. You shouldn’t have been waving it around like a loaded pistol.” Mason boasts that he’s “packing loads of sperm” and everyone watching squelches the urge to vomit.

Where did Will go, anyway? Oh right, he’s at a Meat Cute in the Uffizi Gallery, advancing slowly as Hannibal sketches another version of Botticelli’s Primavera with Will and Bedelia’s faces.

The muted strains of the love/bloodbath theme from “Mizumono” begin. Hannibal is thrilled to see his bestie/boyfriend/victim and reveals his heart. “If I saw you every day, forever, Will, I would remember this time.” Will smiles, really smiles. This is romance, people. This is one of the greatest love stories of our time. Will: “I wanted to understand you before I laid eyes on you again. I needed it to be clear… what I was seeing.”

“It’s all starting to blur,” he whispers. “You and I have begun to blur.” Hannibal agrees: “Freeing yourself from me and me freeing myself from you. They are the same.” Will: “I’m curious whether either of us can survive separation.” They leave together with their matching wounds and limps but someone else is watching: Chiyoh. As Will pulls a knife from his pocket, she shoots him in the arm, probably aiming for some juicy hurt/comfort Hannigram fanfic.

Will and Hannibal aren’t the only ones blending together. After a kaleidoscopic, sensual sex scene between Margot and Alana, we surmise that this isn’t their first rodeo together. Afterwards, Alana helps Margot dress and lets her know that she has intentions of sharing Mason’s leads on Hannibal with the FBI. Margot does want just one more thing, though: “Any experience harvesting sperm?” 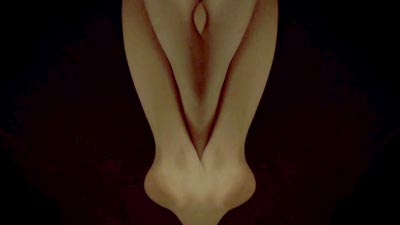 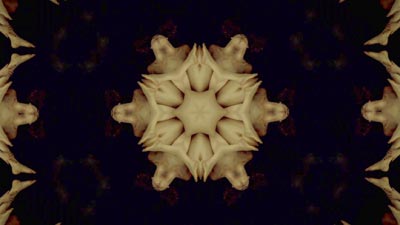 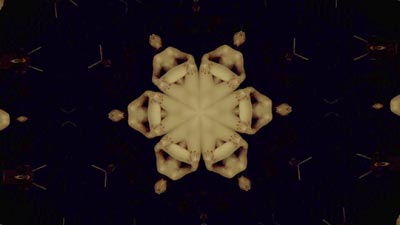 A handsome and moustachioed detective is now talking to Jack and Bedelia. He denies that Hannibal and Il Mostro are the same person while Bedelia denies that Dr. Fell killed anyone. Jack is dismissed and the detective gets rather cozy with Bedelia. Meanwhile, Hannibal is tending to Will’s wounds. “You dropped your forgiveness, Will,” he says, brandishing Will’s knife but stabbing him with a syringe instead.

Another flashback to a Will and Hannibal dinner, where the blurring of the two is displayed in black and white smoke that blends into grey, another metaphor for morality. In real life, Will is sat in a chair at the end of a dinner table while Hannibal brings him soup and straps him down. (Just some light bondage.) “I would have liked to show you Florence, Will,” Hannibal fantasizes. “The soup isn’t very good,” Will stammers. “It’s more for my sake than yours,” he replies matter-of-factly.

Jack enters the building downstairs, which turns out to be Sogliato’s; it looks like the one from The Perfume of the Lady in Black or the more recent The Strange Color of Your Body’s Tears. So giallo, Bryan Fuller. Chiyoh is in the elevator, too, with a long, slender case. They don’t speak. She realizes she’s on the “wrong” floor. Jack sneaks into the house and tiptoes up to Will. “He’s under the table, Jack,” Will grits out. (What is he doing under there exactly?) Like a snake, Hannibal lashes out and slices Jack’s Achilles tendon. 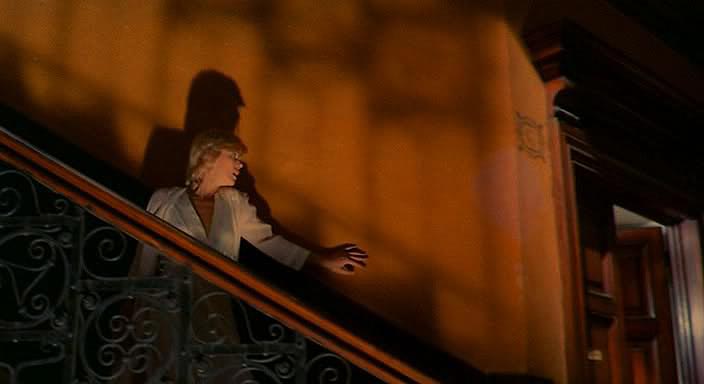 Back at the house, Bedelia and the detective continue their cat and mouse game. He provides evidence; she contradicts it. But she does figure out a way to save her ass. “My husband was hoping to meet a friend before he left Florence. They will be somewhere no one is supposed to be.”

Will fantasized about helping kill Jack at dinner in “Apertivo” and he’s not the only one. Hannibal really just wants to finish that dinner with the three of them. Jack, hooked up to an IV (to help him “relax”) looks alarmed. “Jack was the one to suggest getting inside your head,” Hannibal discloses, while taking out a small circular saw. “Now we have the opportunity to chew quite literally what we’ve only chewed figuratively.” Will must be on some heavy drugs indeed because Jack is the one who starts screaming as Hannibal cuts into Will’s skull, in yet another OH MY FUCKING GOD moment on this show (and a unique cover version of a similar scene from the Hannibal film).

But what’s this? A meat locker? To quote Charles Manson, “now it’s the pigs’ turn to go up on the cross.” Hannibal and Will are now suspended upside down among the dead pigs as Mason wheels up to them. “Welcome to Muskrat Farms.”

There’s a lot of blending and blurring in this episode, melding and molding and shaping of identities, sexualities, victors, and victims. Hannibal is the most like Will, but he’s left his bloody fingerprints on just about everyone else.

Read More
Hannibal Season 3 Episode 12, “The Number of the Beast Is 666” [Recap]
Comments
Submit a Comment