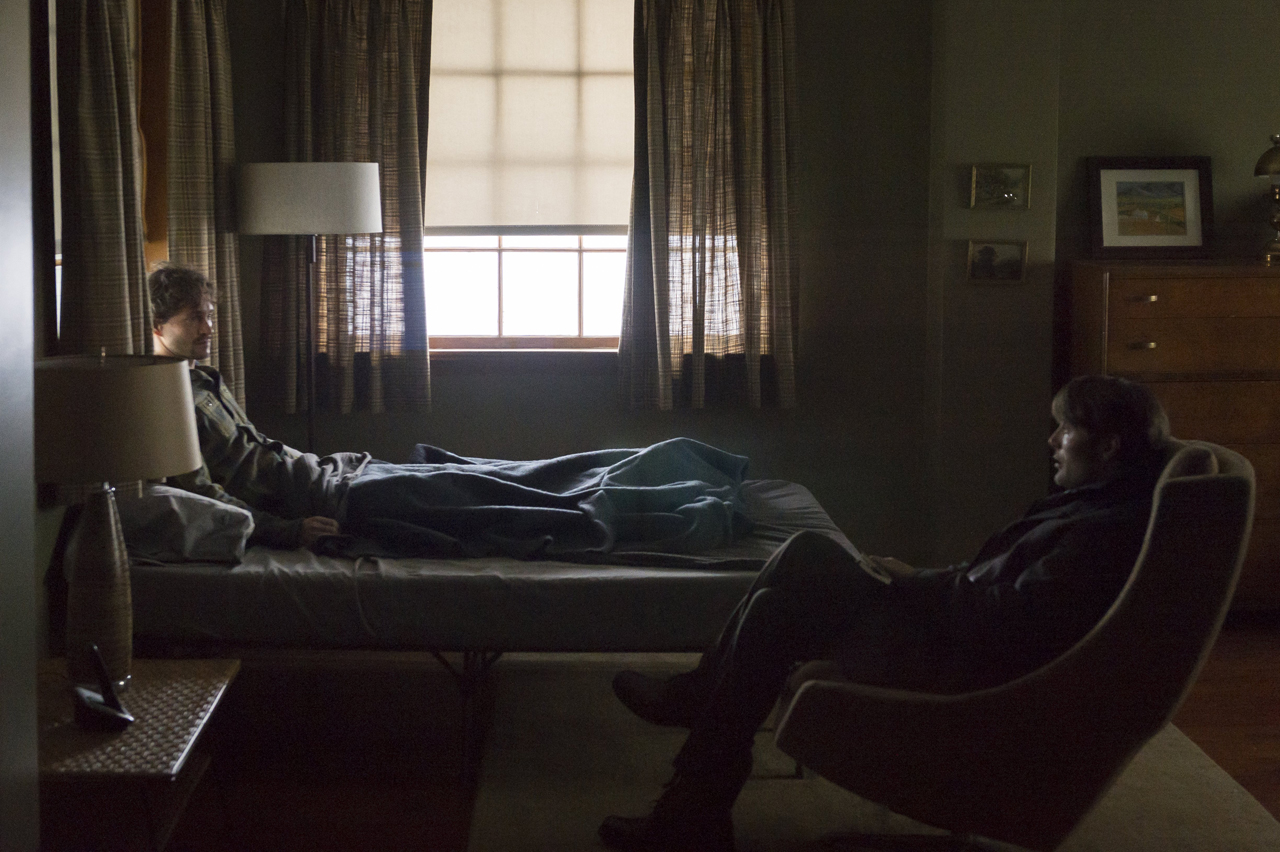 More sad cannibal noises ensued this week when it was announced that NBC was moving Hannibal to Saturdays. It was soon revealed, however, that Hannibal would remain on Thursday nights for Canadian viewers, which is great news for me personally. There is still no word on a renewal, but Brian Fuller did say this in a recent TV Guide interview:

And so much changes in the finale of the third season that pays off all of these dynamics between Will and Hannibal that we’re talking about – the regret and the betrayal and the wanting to move on and the fear that you might not be capable of moving on. All of those things play out through the Red Dragon arc. After the finale, I’d love to perhaps re-open the conversation with potential networks or streaming options once they clearly understand what the story is that we’ve told.

Someone on Tumblr has pointed out that the deal with Amazon expires in 2017 which isn’t that far away and as the De Laurentiis company stated on Twitter, it is precisely the amount of time they need before they can start production.

When we last saw Hannibal and Will, the fancy cannibal was trying to get into his favorite empath’s head (literally) while Jack Crawford watched in horror. Suddenly, a group of men, including Handsome Moustachioed Detective, bursts into the room. He’s there to take both Hannibal and Will to Mason Verger, but not before instructing two of his gun-toting goons to open up Jack “all the way like Lecter did.” Two bullets pierce the window as well as the craniums of the goons. It’s Chiyoh.

Jack tells her that he knows both Hannibal and Will. “They’re identically different,” he quips. He also lets her know that he’ll only give her the location of the blood-crossed would-be lovers once she pulls the needle out of his neck. She does and leaves him with a handgun before she leaves the room.

Margot’s phone rings and wakes her up. Next to her is Alana, who sees Hannibal’s face in the shadows of leaves on the bedroom ceiling. “I think it’s time you get what you want,” she tells Margot. She rationalizes that because Mason is a sadist, it will give them time to do just that.

Just like the end of “Dolce,” Hannibal and Will are strung up by their feet in front of Mason, who takes out Papa’s knife to check Hannibal’s back fat. The two men are then strapped to dollies and wheeled into a room full of pigs in pens. “You are the best of all that I’ve seen,” Mason tells Hannibal, with as much sincerity as a person like Mason Verger can muster. Later, in his bedroom, he tells Alana that Jack is dead, but Margot marches in to announce that he’s very much alive. In a bit lifted from Thomas Harris’s Hannibal novel, Mason admits to “muddying the waters” about Jack’s credibility, saying he filed complaints with the Italian authorities that Jack had been harassing and threatening him. Alana warns Mason “if you play with your food, you give it the opportunity to bite back.”

Will and Hannibal have been dressed for dinner, and Will looks smashing in a three-piece suit. As the stately and elegant Mozart’s Piano Concerto No. 21 plays, Mason continues to indulge his obsession with other people’s sex lives. “You two remind me of that German cannibal who advertised for a friend and then ate him and his penis before he died.” (That would be one Armin Meiwes, Mason.) There’s more banter between the three, most of which is lifted directly from Hannibal the book. Mason instructs Cordell to moisturize Will as Hannibal asks, “What will be the first cuts of me you’ll serve?” Cordell explains with the kind of pedantic detail that Hannibal can definitely appreciate. Hannibal flashes Mason a genuine smile: “You’ve thought of everything.”

Well, not everything. Will bites a chunk out of Mason’s face and spits it onto the fine Verger china. He glances at Hannibal, who is sporting a look of intense admiration and amusement (and probably a murder boner). Cordell eventually sews up his face and then brands Hannibal’s naked back with the Verger crest as the not-so-good doctor is tied up in a pen like Michelangelo’s Man. Cordell brags about how Mason is a “visionary” and then shares his recipe plans for Hannibal’s tongue, as well as the rest of him. “Some things,” Cordell reveals while casting a downward glance, “are best saved for last.”

Later, as Margot gets her brother settled in his motorized wheelchair, Mason muses about feeding Hannibal’s genitals to his eel. He asks Margot how long she and Dr. Bloom have been “an item,” remarking that Margot must have “had a chance to check under the hood.” His eyes are calculating. “How’s the uterus? Intact? Are the hips childbearing? Roomy?” Turns out that Mason has already found a surrogate but explains that Margot needs to prepare herself “psychologically” before he gives her any further details.

Alana visits Will in the dining room, where he’s been left alone, presumably to think about what he’s done. As the slightest strains of the Mizumono “love theme” are heard, Will queries, “You helped Mason Verger find us?” He gets about as nasty as Will Graham ever gets: “Almost as ugly as what Mason wants to do to us is the fact that he can do it with the tacit agreement of people sworn to uphold the law.” (Another Harris passage.) Alana is still unsure which side Will is on, but he is certain he can get her to help save him by spilling blood, “either by your own hand or someone else’s.”

Cordell preps Mason and Will for the much-ballyooed face-off and Cordell gleefully informs Will that he’ll be immobilized but feel everything (a metaphor for Will’s life before Hannibal?). At the same time, Margot and Alana discover the surrogate: a pig with a human baby inside, a baby with no fetal heartbeat. (This isn’t as farfetched as it looks, although Mason IS a dick.)  Margot is horrified and demands that Alana take it out, the process of which is intercut with the face surgery.

We see Hannibal carrying Will home through the snow (another nod to the original text) as Chiyoh shoots and kills their Verger-employed pursuers. Cordell wakes up wearing someone else’s face, but it’s not Will’s, it’s Cordell’s. It hasn’t been surgically attached and it slides off, leaving a bloody imprint, as Mason screeches Cordell’s name over and over.

Alana enters Mason’s bedroom, into which he’s managed to wheel himself. “They’re all dead out there,” she states with somber but definite triumph. Margot enters to confront Mason about the surrogate discovery. Then Mason’s mask truly does slip and what it reveals is ugly indeed. He turns from cruelly funny to just plain cruel, reminding Margot that without an heir all his money will go to the Southern Baptist Church.

But Margot and Alana have a surprise for Mason. “Do you know what happens if we stimulate your prostate gland with a cattle prod?” Alana asks, like she’s asking him what time it is. “Hannibal does. He helped us to milk you.” An enraged Mason goes for his gun, but Margot pushes him into his eel tank where he gets deep-throated to death. I’m going to miss Mason’s character, but I’m not going to miss him THAT much.

At Will’s house, Hannibal talks to Chiyoh on the porch. “Will you watch over me?” he wonders. She smiles and seems happy. “Yes. Some beasts shouldn’t be caged.” Then the real question: “Did you eat Mischa?” “Yes,” replies Hannibal. “But I didn’t kill her.” He tells her that the most stable elements in the periodic table are between Iron and Silver and that it seems like an appropriate place for her.

A teacup appears and shatters and just then, Will wakes up. Hannibal comes back inside. Once again, the Mizumuno theme is playing and we wait for our own hearts to shatter. There’s a journal on the bed, filled with equations. Apparently Hannibal is truly attempting to reverse time: “Did we talk about teacups and time and the rules of disorder?” But Will is not having it. “The teacup’s broken. It’s never going to gather itself back together again.” In the world’s saddest breakup scene, Hannibal pleads with him as much as Hannibal pleads with anyone, reminding him that not only do their memory palaces share rooms but also that he’s “discovered” Will there, “victorious.”

“I’m not going to miss you,” Will says, sighing heavily, as if trying to convince himself. “I’m not going to find you. I’m not going to look for you. I don’t want to know where you are or what you do.” Another heavy sigh. “I don’t want to think about you anymore.” Hannibal tries to change his mind. “You delight in wickedness and then berate yourself for the delight.” Will: “You delight. I tolerate. I don’t have your appetite. Goodbye… Hannibal.” Without a word, but with a face that epitomizes the word heartbroken, Hannibal leaves.

Then, it’s nighttime and a squadron of police cars is in Will’s front yard. And there’s Jack Crawford. Will steps onto the porch. “He’s gone, Jack.” Hannibal, who has apparently been hiding in the barn for God knows how long, addresses Jack personally. “I’m here.” He walks out with his hands up while Chiyoh has the FBI men in the sights of her rifle. “I want you know exactly where I am and where you can always find me,” Hannibal explains, casting a glance at Will, who disgusted and disbelieving, goes back inside. (“I wish I could quit you!”) Jack instructs the men to put Hannibal in his car. Chiyoh walks off in the snowy darkness, alone.

After such an incredible episode, perhaps even non-Fannibals can begin to understand how much we need this show in our lives. For the next six episodes – the remainder of Season Three – we will see what Bryan Fuller can do with the Francis Dolarhyde/Red Dragon storyline. I’m pretty sure we’ll come out of this even more shattered than that damned teacup. 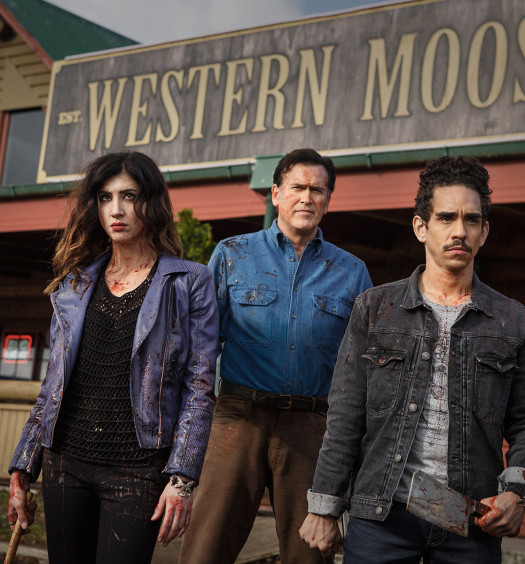