I Ate a Bunch of Mushrooms and Watched ‘Mandy’. Here’s How it Went

Okay, so allow me to set the scene. It’s 11 o’clock on a Friday night and I’ve only been awake for 20 minutes. I call all my late night friends to try and salvage what’s left of my night off, but to no avail. It starts to set in that I’ve completely wasted half of my weekend, and then it dawns on me. My friend Peyton gave me a bunch of mushrooms for my birthday. But what do I do once I’m tripping? Watch the blood spewing, cheddar vomit drenched fever dream that is Panos Cosmatos’ Mandy, of course. It’s so obvious I can’t believe it didn’t dawn on me earlier.

Now, is this a good idea? Almost certainly not, but you try telling that to someone in the beginning of a mushroom trip. Especially when that someone is yourself, and ESPECIALLY when yourself is an idiot. So we begin. Almost everything that follows this paragraph was deciphered and cleaned up (as much as possible) from the stream of conscious scribbling I did that night, and is really more like a live tweet than a review. Whatever it is, hopefully it’s somewhat coherent. Also, spoilers abound. 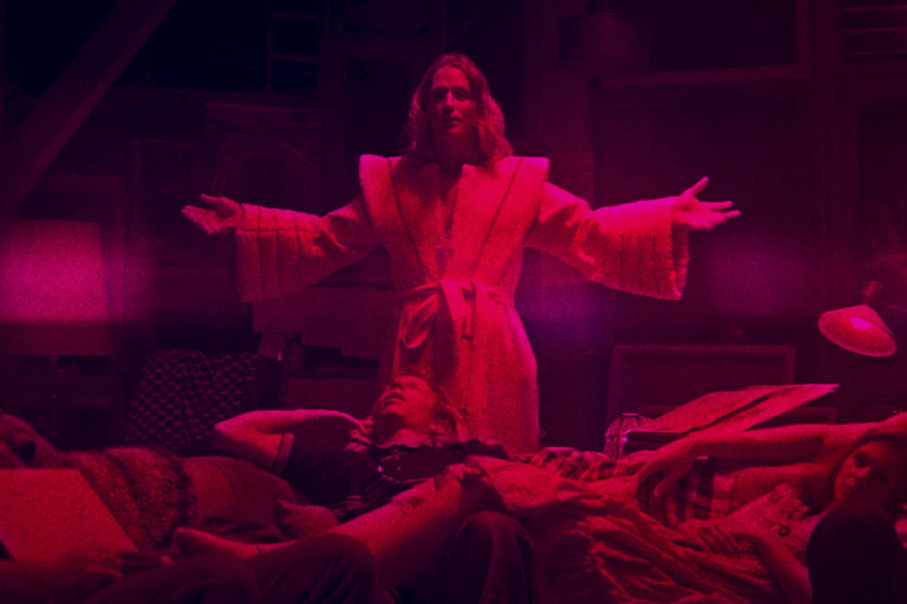 How I’m about to be feeling here in a minute.

HOLY SHIT THIS MOVIE STARTS OUT SLOW. Yeah, we get it, you’re a Coppola and you love your girlfriend, stars, and don’t know how to tell a knock knock joke. Hit someone with an axe already. Also, why does he treat his girlfriend like he’s her dad throughout this whole movie? I don’t remember that from the first watch. His affection is much more parental than loverly. It’s kinda giving me the willies. This whole beginning is molasses. He surely could’ve found a way to make this interesting in any way. Also, we know they’re in the woods, how many shots of fucking trees do we need?

Sober me here for a disclaimer. Much like when I first saw the movie in theaters, the first twenty minutes go by rather slow and uneventfully, and frankly, I’m just not high enough to help it out. So, I dig up some more shrooms leftover from the last time I tripped. I don’t usually have this many hallucinogens laying around, I swear.

Finally the cult shows up, and we’re ready to get rolling on the good stuff. Now, Jeremiah is definitely a creepy bastard. The David Koresh vibes are very real. But why the hell is he so obsessed with Mandy? I guess it doesn’t really matter, it gets us where we wanna go. And I’m also a sucker for a weird artist in a Black Sabbath shirt. On second thought, I get it. As you were, Mr.Heaven’s Gate. Unfortunately, even after the Children Of The New Dawn show up, we still have like twenty minutes of sweet fuck all to sit through. Honestly, it’s weird that I’m complaining about this so much. I liked It Comes At Night for Christ’s sake. Plus her talking about her childhood had me in tears.

Mandy: “Each kid took a turn in killing a starling”

FINALLY the evil shit is here. The Hell’s Angels from….well, hell. Like the cool guys that cut class to smoke cigarettes at Cenobite High. Why anybody would enlist them to help capture their crush is beyond me though. Do you want her to get eaten? Cause this is how you get her eaten. It’s kinda crazy that they don’t eat her actually. Like, they have an image to uphold, and that image is of the type of people who eat people. Not that they’re not “shit your pants on sight” terrifying anyway, but imagine them with bits of the woman from Birdman in their teeth.

So, glaring oversight on my part, but I forgot that the real bad guy in this movie is hallucinogens, and I’m really starting to regret doubling down on the doses. This whole drugged out kitchen cult scene is taking me places I’d rather not go. Like I bought a ticket to ride a Ferris Wheel, but it turned out to be The Zipper and the seat belts are all broken….and I’m on a shit ton of mushrooms. Also, hot tip, Jim Jones Jr., if you’re trying to sleep with someone and your dong looks like that, probably don’t show it off. Or at least warn them first. Actually, yeah, just don’t show people your dick out of nowhere, you weird little freak.

Okay, so in retrospect, I understand the slow ass beginning now. I didn’t realize how much those moments endeared her to me until THEY SET HER ON FIRE! Holy cow this hits hard. And Nic is selling this shit hard. Over the top, but still sold. Honestly, I feel ya Nic. I too feel like having an alcohol fueled emotional breakdown in my tighty whities in a bathroom. This scene is so good. It feels like he’s screaming inside my soul. I remember people laughing through it in the theaters and I just don’t see how. Sure, it’s kind of over the top, but not funny. At this point I’m half way through this movie and things are just now really starting to get going, both on the screen and with all the weird fungi turning my brain into an intergalactic jello mold. I still have trails of Mandy’s burning body in my eyes, and in my current state it probably wouldn’t be my first choice of things to take up residence there. 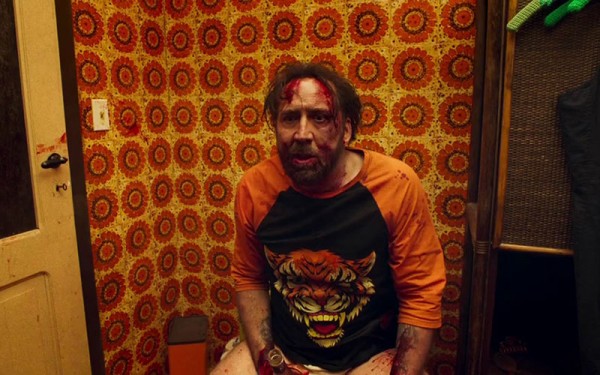 You know the people who complain about jump scares where cats jump out of the closet or whatever? well, those people don’t have cats. This furry little demon just jumped on the bed and hissed at me for no reason. And in the state I’m in. The controller nearly hit the goddamn ceiling. The gumption of this little bastard. Speaking of gumption, did this man really just put a title card 80 minutes into the movie? Bold move, Panos. Bold move.

Dear god, did this movie really just turn into an anime or am I just tripping that hard?

Oh no, we’re back in live action. Good. Nic Cage channeling his inner Alex Jones with that “you are one vicious snowflake” line is the best part of this movie and I will die on this hill. These fucking bikers are creepy. This movie didn’t get enough love…HELLO RANDOM IMPLIED BUTT RAPE, HOW ARE YOU….for the character design. Or this INSANE color pallet. Or the score. Man, this movie rules.  Speaking of weird penises, this man has a whole katana for a member. What is with Panos and weird wangs? Clears up the old couple with blood butt question though. “YOU RIPPED MY SHIRT!” is the second best part of this movie. Again, die on that hill. 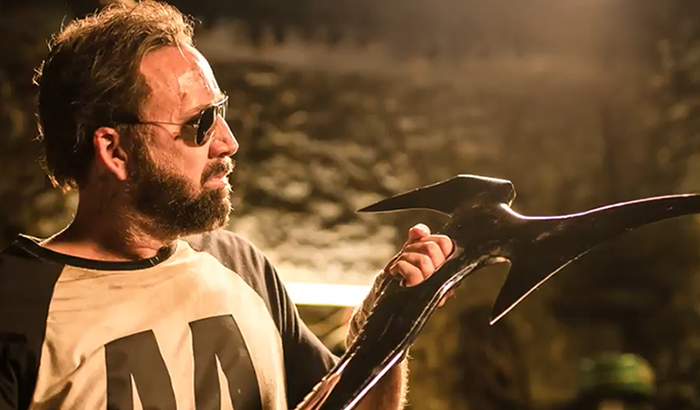 As for how I’m currently feeling, not too dissimilar to the way Red does when he eats the weird gray goo out of the jar. Who in the fucking world, by the way. Starting to feel like this whole movie was designed to fuck with me at this exact moment. Anyway, the action sequences in this movie are all radical, but way too short. The scene with the fire guy was at least a little longer, but still wish these fights had a little more too them as far as run time. For a two hour movie that’s predominantly nothing, you’d think he could’ve found a little more time for them. Granted, that’s probably how you feel reading this. Speaking of this is whole movie being made to fuck with me, Red talking to the chemist without talking is a thing you can’t REALLY understand until you’re also abnormally high.

Alright, we’re getting towards the end here and this chainsaw fight deserves awards. It may be the most impractical weapon of all time, but the massive chainsaw just adds so much visually. Also, speaking of deserves awards, Linus Roache as malevolent Marshall Applewhite is KILLING this monologue. Everyone talks about Nic, and with good reason, but this dude has been top notch through this whole movie.

Say what you will about Mandy, but you can’t deny the kills are gnarly as hell. Burned alive, cut throat, decapitated, speared through the mouth, arrow through the throat, broken neck, burned alive again, disemboweled by a chainsaw, and head crushed by the bare hands of the national treasure himself. All with top notch special effects too. Nobody can deny this movie of having some of the coolest kills.

Real photo of me finishing this movie right now

If you made it all the way through this, congratulations. I’m not sure how you did it. But if you dug it, I may do something like this again, so feel free to recommend movies for me to watch next time I “expand my mind” in the comments. And always remember, if someone’s about to crush your skull with their bare hands, you can always resort to offering them a blowie.

I Ate a Bunch of Mushrooms and Watched ‘Mandy’. Here’s How it Went 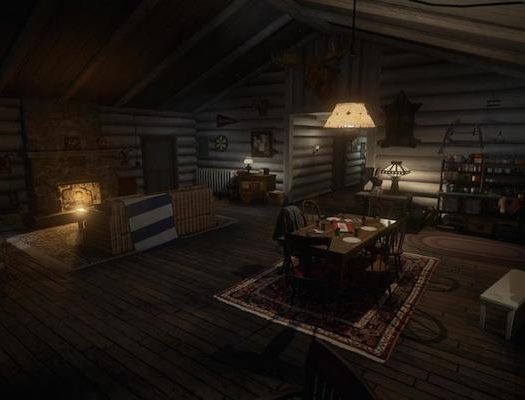