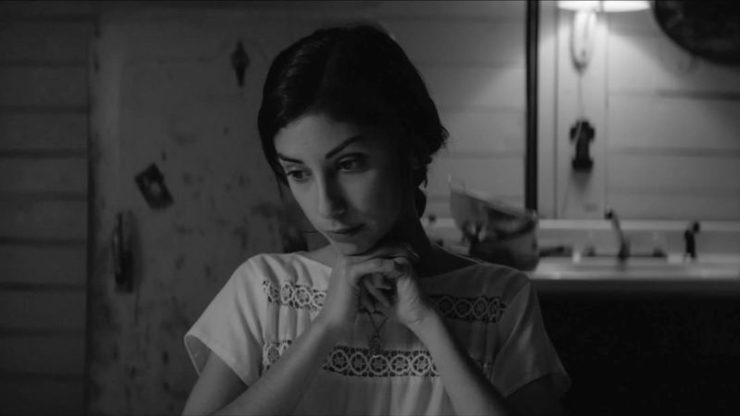 Q&A: Actress Kika Magalhaes talks ‘The Eyes of My Mother’

Nicolas Pesce’s The Eyes of My Mother is one of the most visually stunning and unsettling films in recent memory (review).  A lot of that deep, disturbing sense of dread comes from actress Kika Magalhaes’ performance as Francisca, a character simultaneously as sweet as she is unhinged. Her performance is all the more impressive considering this is her first major feature role.  Just ahead of the film’s theatrical release, we chatted with the effervescent Kika about her character, how she got involved, and what her experience was like on set.

The Eyes of My Mother will open in theaters and VOD on Friday, December 2, 2016.  You can also read our earlier interview with writer/director Nicolas Pesce here.

This was your first major film role; how did you get involved?
I was involved in a lot of other independent movies, most of them never saw the light of day. I guess every actor goes through a journey to get their first break, and I did pay my dues. I got involved in this project when I met Nick in a music video. We’d bonded in the shoot; I didn’t know who Nick was. He was coming out of NYU, so I guess this was his first break as well, which is amazing. I got involved with The Eyes of My Mother when it wasn’t even The Eyes of My Mother, it was just an idea. So he wrote the script with me in mind for Francisca, and because we became friends we got to collaborate a lot. We talked for hours about Francisca, the movie, and the whole script went through so much change. I was thrilled that Nick was so open minded to hear my ideas. Like, I’m originally from Portugal, I was born there and lived there until my early twenties, and since this character was Portuguese, Nick was not familiar with Portugal at all. Which was great, because then I could bring so much of my own person and my own country into the movie.

So this was basically a huge collaboration from beginning to end?
Yes, this was. It really was. It was great. We would think a lot about the movie and come up with different ideas for scenes and just putting in ideas for the character. She changed a lot; you know in the beginning the whole thing was just much more dark, and more just, killing, killing, killing. And more about religious faith, and just how she was hearing the voice of God, that God was telling her to do these things. In the end it became about her and her story. So it really changed a lot.

That change definitely made the film more effective in that you sympathized with this killer. A lot of that was your portrayal; she was really sort of elegant and graceful. Did your background in dance contribute to your performance?
Oh, thank you. I did study dance before moving to the United States. It’s interesting, because a lot of people ask me if I planned her walk and the way she moved. I didn’t really plan anything, those mannerisms happened naturally. I didn’t try to make her look as a dancer, I guess those things just happened, you know? And that dance scene, it was also kind of improvised. We weren’t planning on shooting it that way. How it was scripted was that we were going to shoot that scene the same way we shot the little girl; I was going to be carrying the dad around while listening to the music. Well we shot it that way, but it didn’t look very nice, and I do love to dance and sometimes on set I used to just dance a little bit. Nick saw me doing that, just dancing on the side, and just said, “Let’s do that. Let’s put the body in the chair, and you’re going to be dancing for him.” And I thought, “Yeah, that’ll probably look great.” So it wasn’t really the intention of making her look like a dancer; I guess it just happened naturally. Thank you for calling her elegant.

She was! She lures you in with that graceful, elegant nature right before she horrifies you with her dark nature. Was it hard to approach playing the darker aspect of her character?
Funny thing is that I never really saw her that way. Of course I knew she was doing horrible things, but my approach was that there was a reason she was doing all of those horrible things. These horrific acts were not meaningless. The way I saw it is that this was coming out of love. I don’t want to spoil it for the readers, but the reason why she did these things is because she couldn’t stand the thought of people leaving her. She couldn’t bear the fact that she would be alone again. So I never really saw her that way. Everything she did was coming from a loving point of view. (laughs) How creepy that sounds!

That makes sense. We talked earlier about Francisca’s mannerisms; did you have to collaborate with the younger actress, Olivia Bond, who played Francisca as a child, to try to match performances well enough to make Francisca’s transition into adulthood appear more seamless?
I only met Olivia on set, Nick wanted me to spend some time with her. It was funny because we bonded on set. We were playing and running around and dancing. We were playing with the cows together. She was really smart. I felt that as a person we were really similar; she was really curious and she was always around Nick asking questions. I was the same way. They shot her scenes before mine, so I was there for the whole shoot. Even when I wasn’t shooting, I wanted to see the whole thing. I saw the way that she was on set and the way that the filmed her scenes. I think that the directions she got from Nick were kind of the same that I got. We both knew what Nick was going for; we both knew that he kind of wanted this emotionless character. In the end it really kind of matched.

There’s not a lot of dialogue in the film, it’s heavily visual. How did you prepare for that aspect of the character?
A lot of it came naturally; I didn’t really plan. But I knew what Nick was going for, because of all of the research that he’s done. He told me to watch a lot of stuff and he told me to study serial killers, the Manson case and to watch a lot of horror movies like Audition or stuff from Lars von Trier. So I knew what he was going for. We didn’t really rehearse; we would maybe do some blocking and rehearse a scene before we shoot it, but yeah, really all of that stuff sort of happened organically. I was really surprised with myself too, though, because I didn’t know that that the film would turn out that way.

Surprised in what way?
I guess you never really know, because I’m living it so I’m not seeing what’s going on? When I saw the film for the first time I thought I wasn’t very good, because it’s so quiet and still. I thought, “Oh my god, I kind of suck!” But then, listening to other people, and hearing another actor say that she loved the scenes where I’m praying, or give a little clap, she said those scenes were interesting. I’m just surprised that it came out that way.

So were you surprised at the reception of the film, as well?
Oh my god, I am SO surprised. As I said, I got involved in this when it wasn’t even a project yet. It was just me, Nick, and several other people trying to start something. It was a non-union thing, so I think this whole thing growing so much has been a dream come true. When we were shooting, Nick told me he was going to submit it to Sundance, and I’m like, “Ok. Well, everyone wants to be in Sundance. I’ll believe it when I see it.” Because for me, that was a very big deal, so when we got in, it was Thanksgiving last year, I was so happy! The first time I saw the movie was at Sundance. No offense to anyone else, but the first time I watched it I was just focused on myself, just looking at mistakes. I didn’t like it. I thought no one was going to pay attention to my performance. So when I was reading about my performance from Rolling Stone and Variety while at Sundance I was like, “Oh my god, this is happening!” This is beyond anything that I’ve ever dreamt in my life. Because I was born in a small town, and I moved to the United States to be an actress, so this really is a dream come true.

You should be proud; this is your first major film role and it’s an impressive performance. I really wanted to hug Francisca throughout, but then be absolutely appalled for feeling that way when she commits those horrible acts.
(Laughs) Thank you!

So will you work with Nick again in the future?
Yeah, I love Nick as a person. He’s my friend now. I think he’s a genius, and he has a brilliant future ahead of him. And I would absolutely love to work with him again. And I think that might happen.

Ooh, is that a tease?
Yeah. 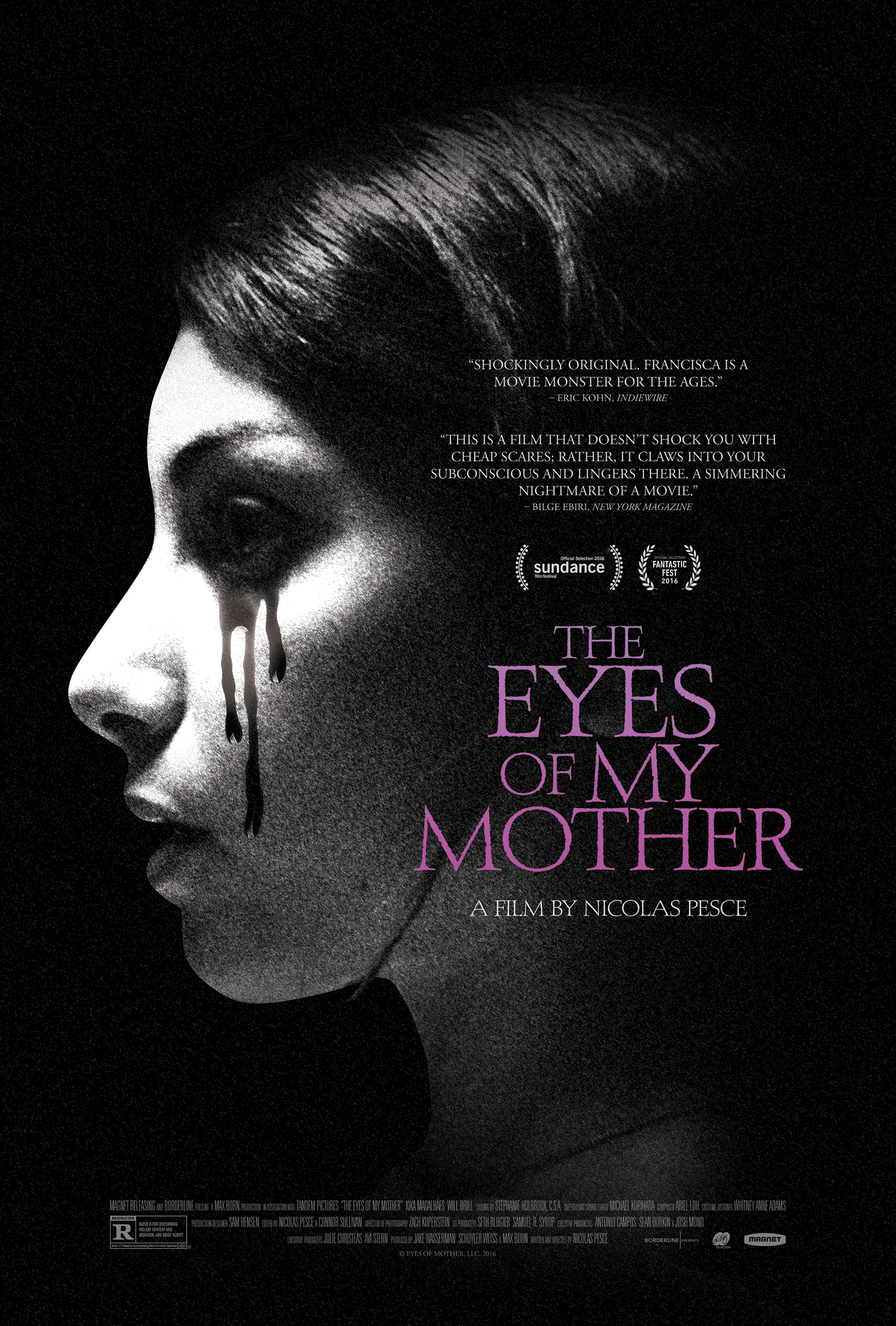 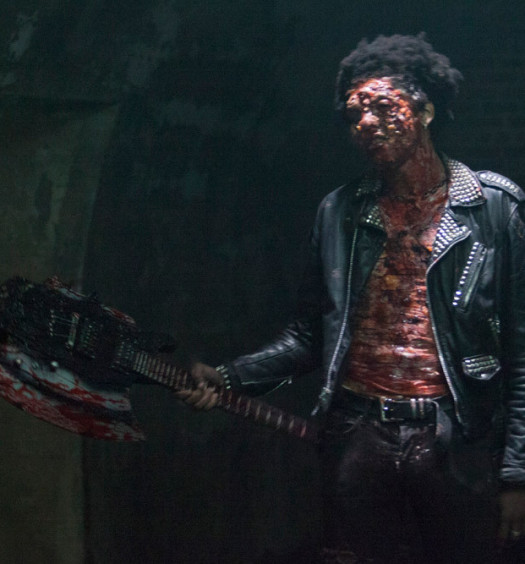 Read More
Getting Hyped for VFW: An Interview with Director Joe Begos