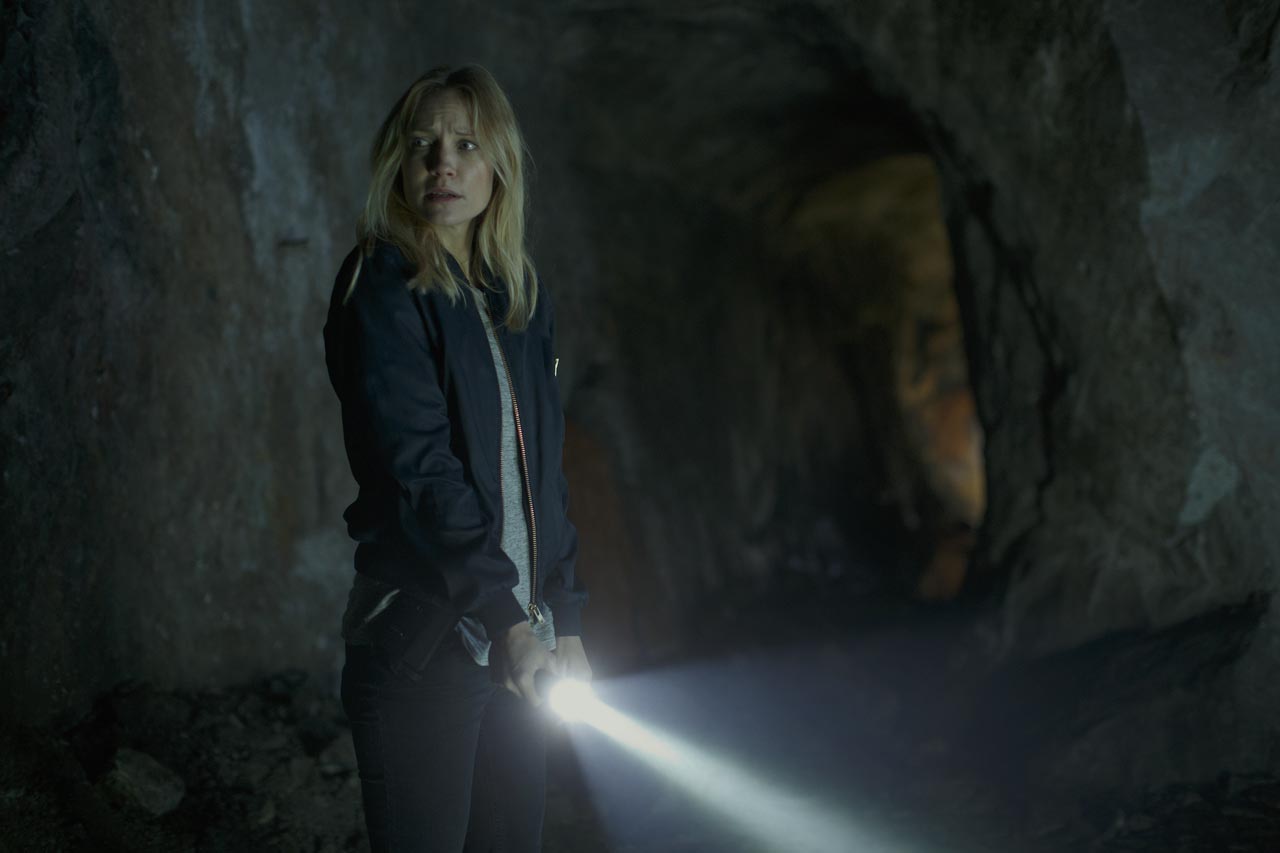 Take a Trip to ‘Jordskott’: Interview with Showrunner Henrik Björn

The recent influx of Nordic films into the genre landscape has resulted in some of the most unique, disturbing, frightening, and unforgettable movies of the last couple of decades. Movies like Cold Prey, Let The Right One In, Trollhunter, Dead Snow, Thale, When Animals Dream, and Lake Bodom have captivated horror fans around the world. Now Swedish TV series Jordskott can be added to that list. 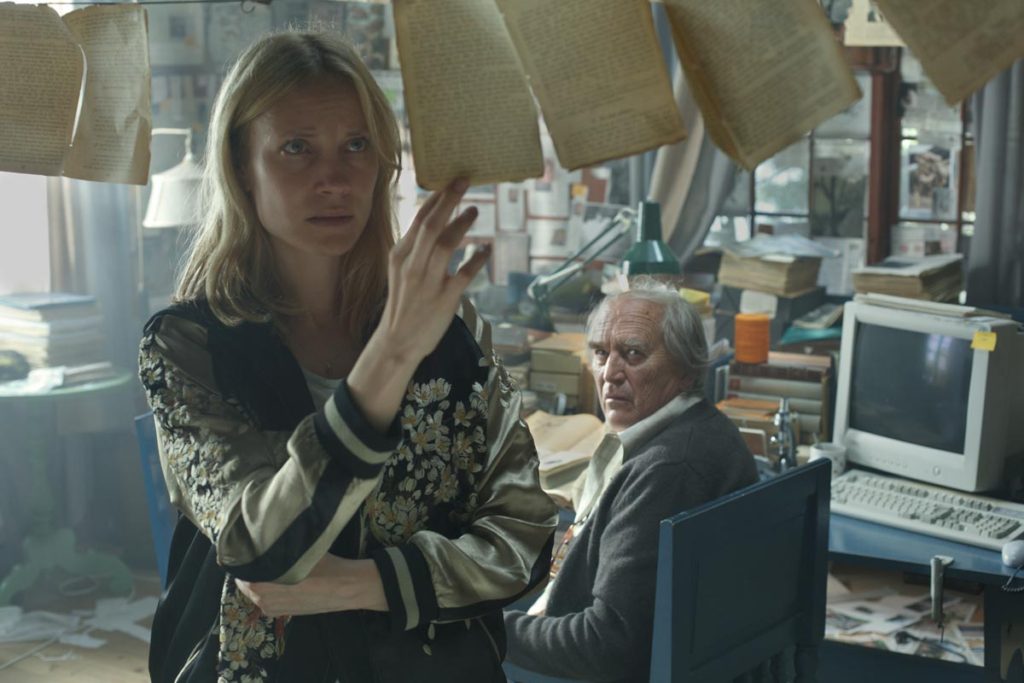 The story starts with a police officer named Eva Thörnblad. Eva has returned to her hometown of Silverhöjd seven years after her daughter Josefine disappeared and was presumed to have drowned. Eva is coming home to settle the affairs of her estranged father Johan, scion of timber and mining corporation Thörnblad Cellulosa, who has committed suicide. When another young child goes missing, Eva can’t help but wonder if the two events are related and begins to investigate. She soon uncovers secrets that have serious and deadly repercussions for everyone in Silverhöjd.

What’s most intriguing about Jordskott is the way it plays around with genre.

What’s most intriguing about Jordskott is the way it plays around with genre. It is reminiscent of groundbreaking shows like Twin Peaks, The X-Files, and even Law & Order, while at the same time bringing elements of folk horror into the foreground. Director and showrunner Henrik Björn agrees that Jordskott is not a “typical horror series” and acknowledges that “it’s a mix of drama and crime, with a supernatural twist (and a pinch of horror).”

However, he says his main inspiration for Jordskott was his grandmother. “She took me for long walks in the forest and lakes around her summer house, telling me about the beings living in nature and how to interact with them,” he recalls. “She was a great storyteller and she influenced me a lot. Furthermore, I believe I have strong ‘geek-genes,’ ha ha!”

The natural beauty of Sweden is on full display in Jordskott and much of the show’s narrative wrestles with environmental concerns like deforestation, pollution, endangered species, and climate change.

The natural beauty of Sweden is on full display in Jordskott and much of the show’s narrative wrestles with environmental concerns like deforestation, pollution, endangered species, and climate change. In this way it recalls the mysterious woods of Twin Peaks, only instead of the threat of The Black Lodge, there are beings that live in these woods known as “huldra.” If you’ve seen Aleksander Nordaas’s 2012 film Thale, you might recall the a similar creature. She was also a “hulder” or “forest spirit”: part human and part animal, often depicted with a snout or a tail. In this way, the battle between nature and humans becomes more literal in Jordskott. 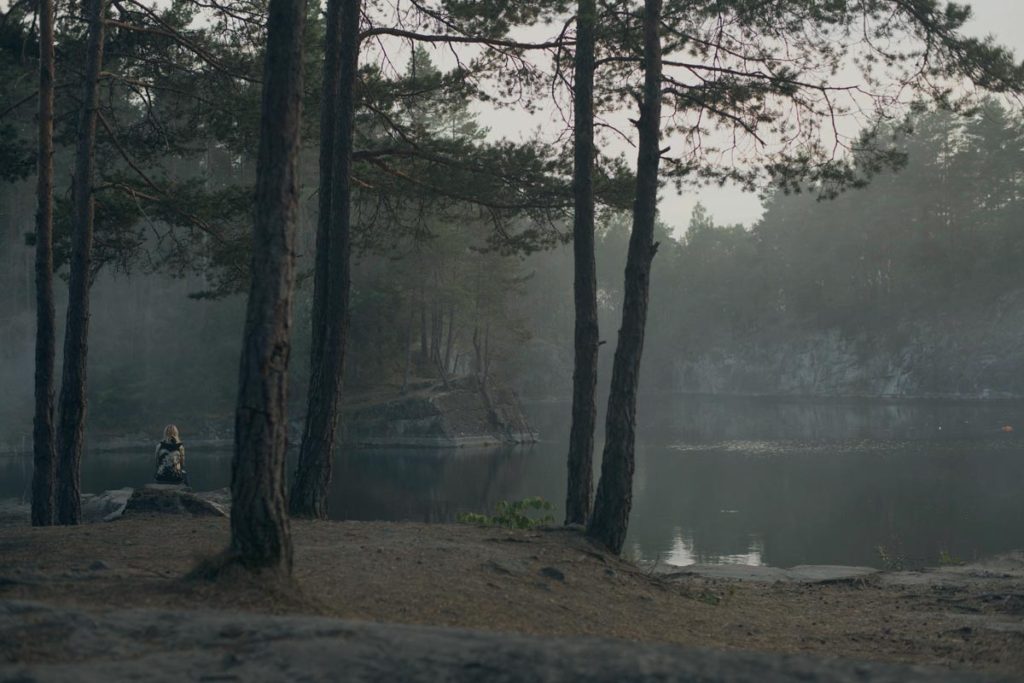 “We still have beautiful and untouched old forests in Sweden but they are endangered,” says Björn. “The main underlying theme in Jordskott is the struggle between humans and nature and our self-destructive behavior as a species. I wanted to tell a dark saga for a grown up audience with the deep Swedish forest as a backdrop.”

“The main underlying theme in Jordskott is the struggle between humans and nature and our self-destructive behavior as a species.”

Those expecting a “monster of the week” scenario like The X-Files or an array of CGI creatures, however, will be pleasantly surprised by Jordskott’s aesthetic. It is exceedingly naturalistic in both the production design and lighting, despite the sometimes fantastical subject matter. This makes its more bizarre elements utterly believable. Björn thinks that the look and feel of the show is one of the reasons for its global success. “Me and my core team—DP Pelle Hallert, producer Filip Hammarström, production designer Agustin Moreaux and my brother, visual FX king Arvid Björn—worked hard on finding the Jordskott look. At the crossroads of realism and fantasy, we hit the sweet spot.” 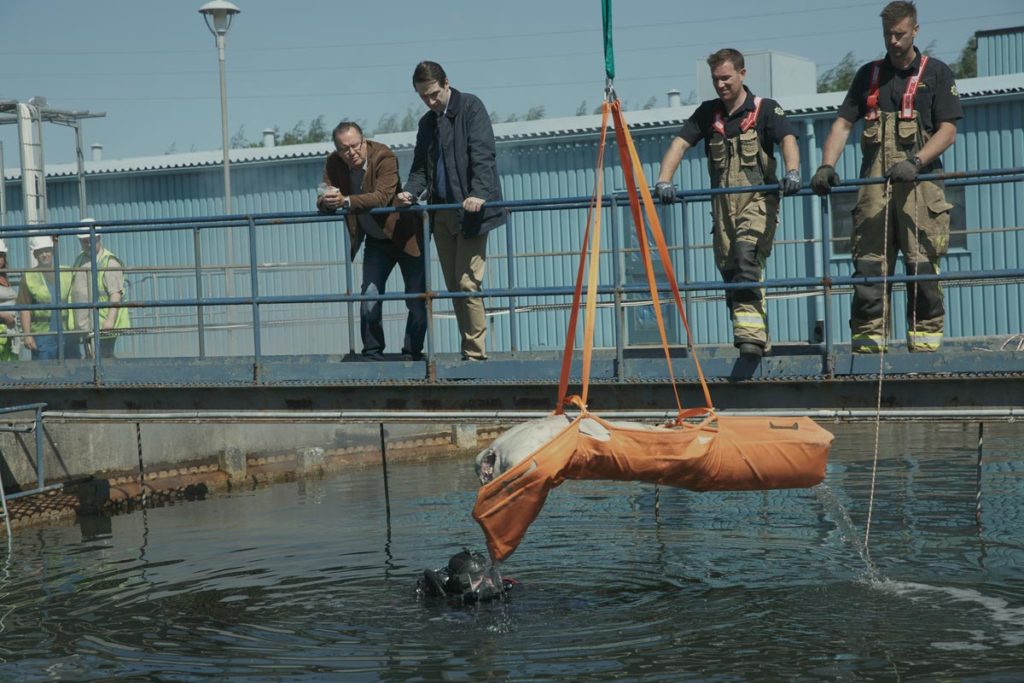 He adds: “I’m very clear about that we must always hold back on effects and CGI and use as many in-camera solutions as possible. Too many films and TV shows get lost and are destroyed in the visual FX swamp. Don’t over tell, give hints rather than be ‘in your face.’ And don’t show the monster unless you really need to. The monster is always more scary in the minds of the audience.”

In Jordskott, sometimes these monsters are human. Characters are presented as one way and then make decisions that have audience members wondering if they misjudged that person’s intentions. There are no purely “good” or “bad” characters. Even the most nefarious of the characters has some good quality that is admirable; even the most admirable character makes terrible, and often selfish, decisions that negatively impact others. Although there are a lot of characters to keep track of, each one is so believable that the show isn’t confusing or hard to follow.

By utilizing the best elements of each of the genres from which it borrows, Jordskott keeps the audience guessing.

This complexity is also found in the show’s various storylines. By utilizing the best elements of each of the genres from which it borrows, Jordskott keeps the audience guessing. Sometimes the most shocking twists are supernatural, while other times they are grounded in reality. “People are intrigued by Jordskott because they can relate to many things in the show and are sucked into the story,” says Björn. “But just when they think they are in control, Jordskott makes an unexpected turn and something out of the ordinary happens.” This quality is likely the result of Björn’s influences and outlook on genre film and television.

Björn describes himself as an atypical horror fan that prefers genre fare that “evokes emotion, like The Wire or Ringu, Breaking Bad or The Shining.” As a child he was obsessed not only with the Star Wars universe, but he also recalls hiding behind the sofa at his cousin’s house watching Alien and Blade Runner. “I still remember the excitement of seeing these films,” he says. “A new world was opening up and it was a world I wanted to be a part of.” Björn adds that he’s been collecting comic books and graphic novels his whole life: “Artists like Jean Giraud (Mobius), Frank Miller, and Will Eisner made a huge impact on me as a child.” 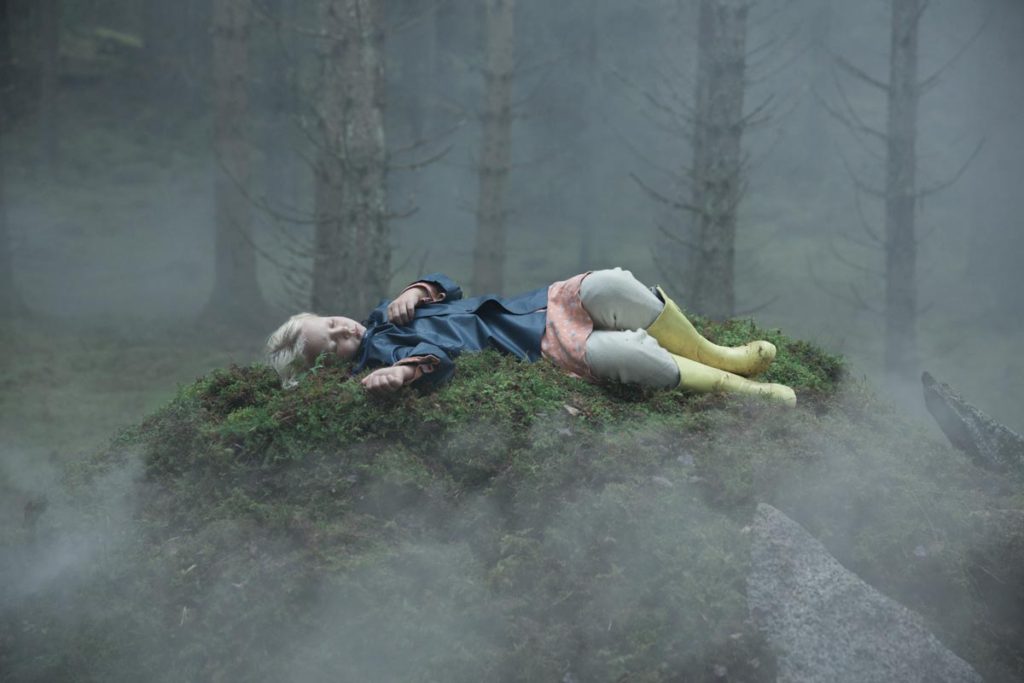 As far as his creative process, Björn says that “building the universe, with all its characters, back stories, and mythology has been both challenging and rewarding.” He believes that the attention to detail and passion for that universe is something that can be felt through the screen. The show has serious international appeal and despite being in Swedish and not English, it has been sold to more than 55 countries.

“These are the golden days for TV drama.”

When asked why he thinks that TV is in such a good place now in terms of quality programming, Björn concedes that “these are the golden days for TV drama.” This is in part, he feels, not only because of all the new platforms for TV like HBO and Netflix, but also because of local networks like SVT, the hugely successful Swedish public broadcaster responsible for shows like The Bridge and Real Humans, along with Jordskott itself. “This creates a growing demand for quality TV shows,” he says.

“It’s a good place to be in,” says Björn, “And I’m looking forward to the coming years.” Jordskott is currently filming season two and he hopes there will be more in the future. Adds Björn, “That journey has just begun.”

All ten episodes of Jordskott are currently available on Shudder. 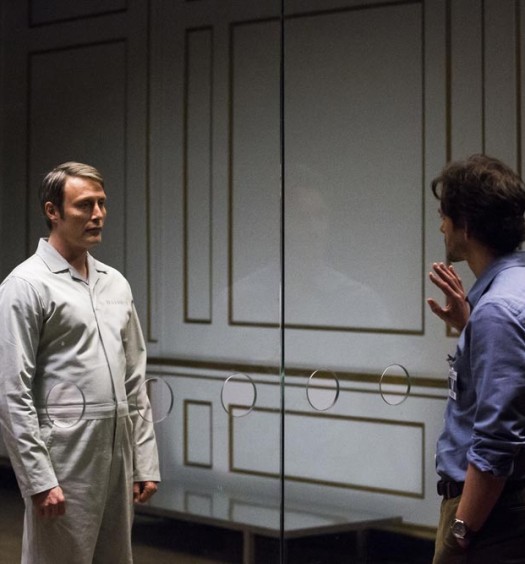 Hannibal Season 3 Episode 13, “The Wrath Of The Lamb” [Recap] 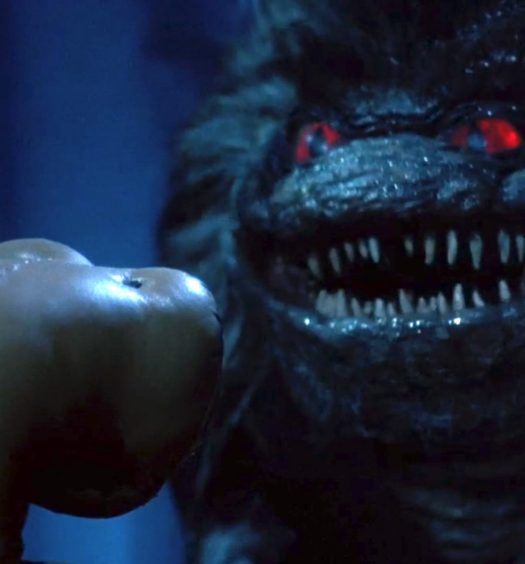