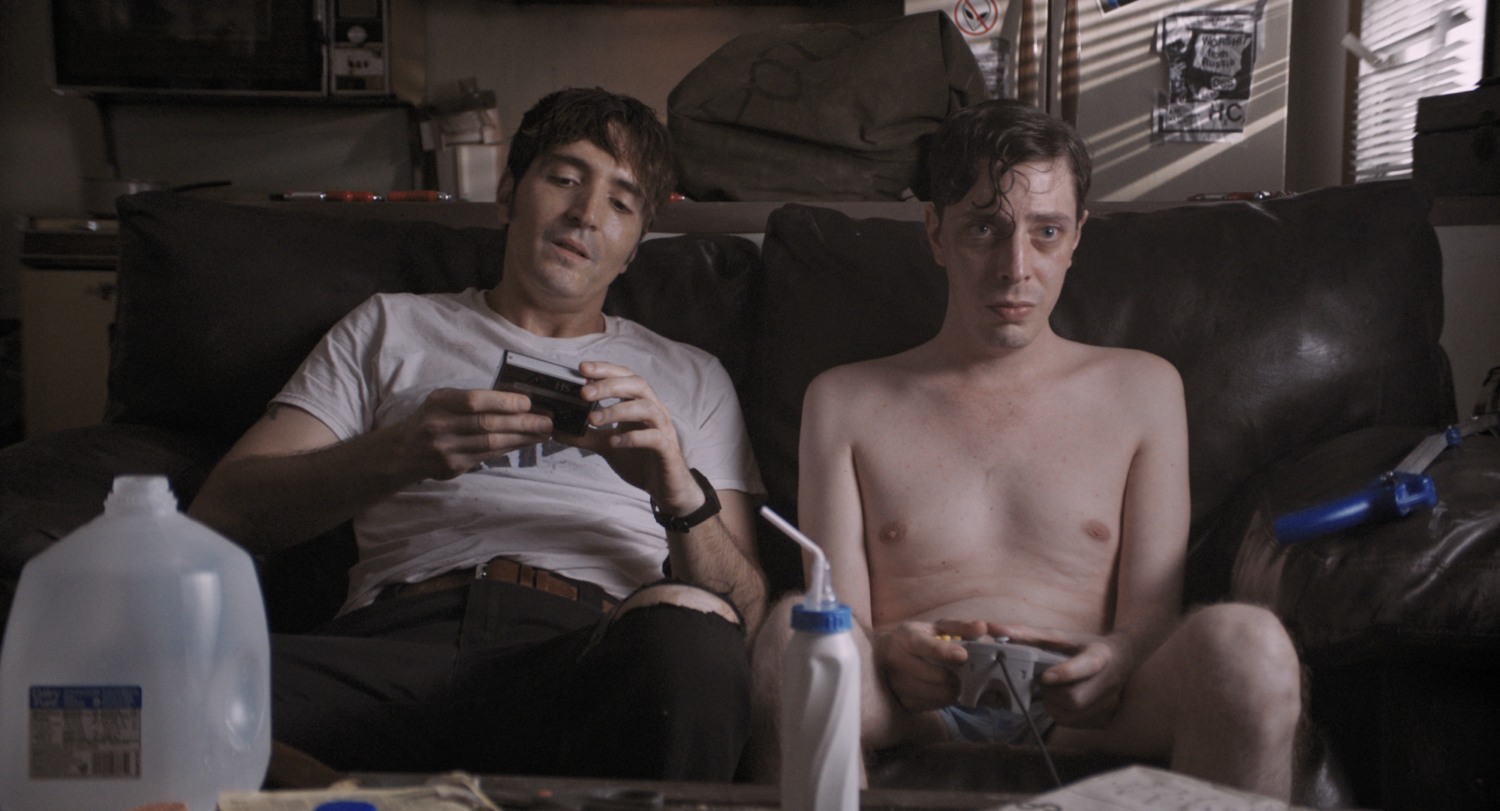 Shakespearean. Kafkaesque. Byronic. Kubrickian. These are a few of the many words that will never, ever be used to describe Relaxer.

Relaxer is the most recent effort from writer/director Joel Potrykus, whom you may know from The Alchemist Cookbook. The movie finds its home in the nostalgia wave where no other film wants to. A nostalgia trip for the parts of the decade that nobody misses. If Stranger Things is a pop culture photo album from bygone times, then Relaxer is a crust punk digging through their landfill. It focuses on Abbey (Joshua Burge; The Revenant) in the months leading up to Y2K as he accepts a ludicrous challenge from his older brother Cam (David Dastmalchian; Prisoners, Blade Runner 2049). The challenge: beat level 256 in Pac-Man without leaving the couch, and win hundreds of thousands of dollars in the process.

It’s immediately apparent that this sort of infantile dare is commonplace for the unemployed brothers, as the movie opens up on another such challenge. In this first challenge Abbey gets to drink the rest of the milk from their fridge out of baby bottles, to rather disgusting results. You can practically taste the sick, watching the sweat-drenched man drinking bottle after bottle of milk in their unkempt hovel. It’s here that Relaxer finds its greatest strength. It’s disgusting.

If normal cinematic fare is a leisurely walk in the park, then Relaxer is a lethargic marathon, reminding you around every turn that you can quit. ﻿

The visuals are designed to convey the thick layer of grime that encases every aspect of these characters lives. Potrykus shows a surprisingly deft and subtle hand in the way he conveys filthiness. Compared to other gross-out movies like Kuso, he rarely goes over the top to disgust you. You can reasonably imagine people actually living like this, and that’s what makes it so much more effective. He wants you to get inside the lives of these people, to make you feel uncomfortable and unclean. He accomplishes this goal with ease. If normal cinematic fare is a leisurely walk in the park, then Relaxer is a lethargic marathon, reminding you around every turn that you can quit. By the time the title card comes up, you already want to take a shower.

Aside from an undeniably talented team, the film’s greatest asset in their quest to make you feel dingy is their ability to stretch a dollar. While they were almost certainly operating on a micro budget, it’s hard to tell. A story that never leaves a single couch helps save on the location budget, and keeping the cast to a bare minimum naturally saved some coin. These decisions, along with a few other key choices like being sparing with effects, grants Relaxer a production quality rare for a movie of its kind. The picture and sound quality let you linger in every foul second, seemingly engaging all five of your senses in a crust punk dystopia. It really is as unpleasant as it sounds. But, not to beat a dead horse, that’s the entire point.

A script like this takes some heavy lifting in the acting department, and Potrykus and crew found some strong backs.﻿

From a narrative standpoint, the movie doesn’t go much of anywhere once the challenge is issued. There’s not so much of a progression in the story as there is a series of lateral moves, fleshing out what’s already happening. A revolving door of characters begins, with each one coming in to spend their time with Abbey, develop the story through organic conversation, and then leave, never to be seen again. Each interaction sheds a little more light on Abbey and his circumstances. An abusive brother, a Faygo-hoarding juggalo, and a supportive acquaintance each offer important insights into the broken down and timid young man’s psyche.

A script like this takes some heavy lifting in the acting department, and
Potrykus and crew found some strong backs. Dastmalchian’s performance may not be nuanced, but it is convincing. The pseudo-villainous older brother who takes hazing way too far is done often, but rarely so effectively. The way Cam berates, belittles, and abuses Abbey calls back memories of childhood roughhousing crossing the line from my own older brother. And I don’t even have an older brother. For his part, Burge carries the film wonderfully. For each push and jeer from Cam, Abbey has a pitiful withdrawal. From pining for his (probably incarcerated) father to the 3D glasses that he clings to like a security blanket, you believe that he is the stunted man-child he portrays.

From pining for his (probably incarcerated) father to the 3D glasses that he clings to like a security blanket, you believe that (Burge) is the stunted man-child he portrays.﻿﻿

For as backhanded as some of these comments may seem, Relaxer is a very well made movie. It may not be a new touchstone in modern romanticism, but it doesn’t want to be. It’s very deliberate in everything it does. It’s funny and disgusting in equal measure, and buried in there might even be a little bit of heart. For a person who has never really been a fan of “gross-out” movies, like myself, it may be a bit of a slog. But if watching someone vomit their own piss mixed with rotten milk is your type of thing, you’ll have a field day with this one. There’s even a little Cronenberg-like surprise at the end. Relaxer is out March 22nd in select theaters and on VOD. 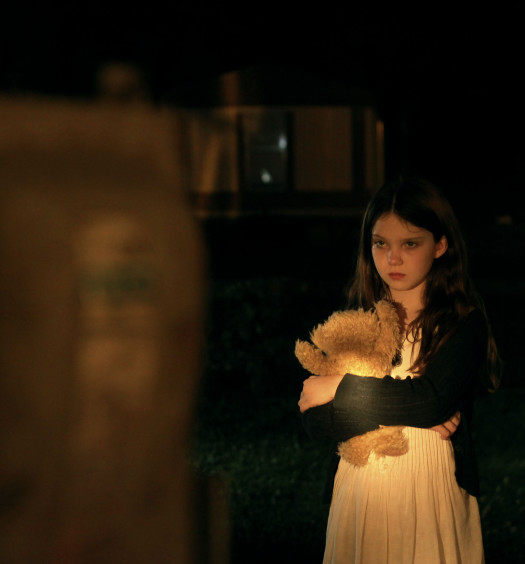 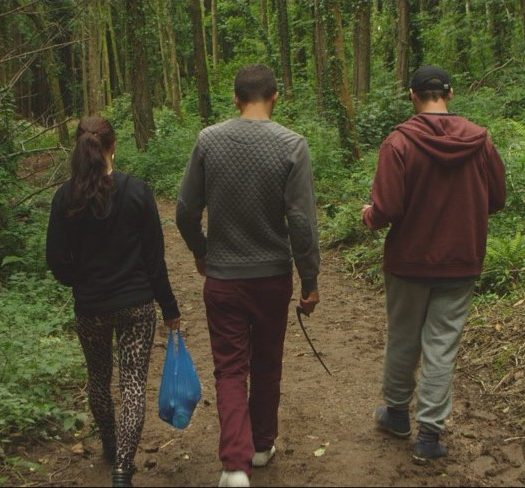