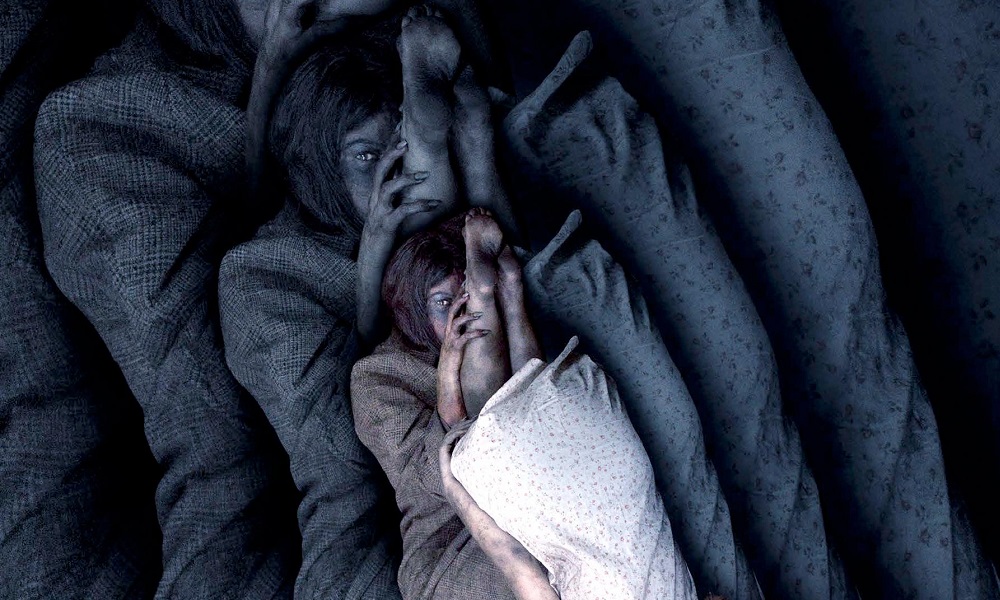 Darlin’, darlin’, darlin’… Just the word alone can summon the thoughts of saccharine femininity doused with a reminiscent 60’s tune. However, Blondie’s song, cooed by punk dessert bombshell Debby Harry, is everything but sweet. ‘In The Flesh’ muses over something someone wants and can’t have, but those restrictions don’t matter to her at all. Debbie used her unique womanhood and rebellious nature to create art similar to filmmaker, Pollyanna McIntosh. Both appreciate a good darlin’ in the flesh when they see one, both will take control and break the rules to get to them.

Written, directed, and starring Pollyanna McIntosh (The Walking Dead), Darlin’ is a direct sequel to Lucky McKee’s (May) 2011’s controversial cult hit, The Woman. Inspired by the writings of Jack Ketchum and continuing the tale of McKee’s 2009 Offspring, Darlin’ sees McIntosh’s The Woman part from her little makeshift family as she enters a strange new world under the rule of order, approval, and restriction. Starring Lauryn Canny, Bryan Batt, Nora-Jane Noone (The Descent), and Cooper Andrews, Darlin’ runs fluidly with the subjugation of women themes present within Jack Ketchum and Lucky McKee’s stories.

Taking the reins from McKee, McIntosh conducts a gutsy, interpretive, and moving chapter of The Woman’s story with a forward premise: Found at a Catholic hospital filthy and ferocious, feral teenager Darlin’ is whisked off to a care home run by The Bishop and his obedient nuns where she is to be tamed into a “good girl” as an example of the miracle of the church. However, Darlin’ holds a secret darker than the “sins” she is threatened with, and she is not traveling alone. The Woman, equally fierce and feral, who raised her is ever present and is determined to come for her no matter who tries to step in her way.

In the effort to see this representation as more than gratuitous violence against female characters, McIntosh keeps McKee and Ketchum’s story running fluidly and guides it by planting her own relevant obstacles and bends on a variety of social commentaries.

While there is so much to unpack and so many allegories to analyze in Darlin’, I felt the need to condense my thoughts by highlighting three elements that really stand out and generally represent all of the magnificent work put into this film. The genre continues to shift, creating a new era of elevated, meaningful horror accompanied by the rise of women not only in front of the camera, but behind it as well. I am truly in awe of how well McIntosh facilitates both with ease, strength, and a particularly creative eye.

It’s no surprise that Darlin’ would be displayed in a visual style all of its own, but I don’t think I was truly ready to experience McIntosh’s personal feminine touch on this wild, gritty tale. What I really noticed was that McIntosh used form and control with her extremely sophisticated use of color. While so many filmmakers are currently obsessed with saturation and extreme contrast to get their points across, to make an impact, McIntosh is an expert at playing with restraint and expression.

Darlin’ is built on a natural palette using brilliant subtle rose tones throughout to incorporate feminine effects as well as stark components of red to mark impending doom. The beautiful, yet subdued contrast of the grit from the world of The Woman and Darlin’ to the contemporary, clean, stark sterile environment they find themselves in has a tremendous effect. Whether it’s a pink rubber glove to embody the essence of womanly duty or a red carpet laid within a white, bright church to tease hidden evils, McIntosh is aware of her message and her audience. She takes a fresh approach by refusing to patronize viewers and, instead, allows them to utilize her productive style to their personal visual accord as the internal plot devices lead Darlin’.

While so many filmmakers are currently obsessed with saturation and extreme contrast to get their points across, to make an impact, McIntosh is an expert at playing with restraint and expression.

From the beginning, Darlin’ is a connection to the suppression of a woman’s curiosity, will, and innate growth. The institutions that try to restrict restrict a woman’s inherent behavior are present as the hospital and the church as well as within some of the characters themselves to represent those evils that stand in the way of a person’s natural predilections. Considered to be misbehaved women, the students are brought to God as an act of reformation and total conversion. Manipulation, force, selfish motivations, and conversion are all inflicted on Darlin’, to those who are deemed as different and rebellious. Darlin’ is a satisfying piece that combats obedience and perfect synchrony using a unique narrative and perfectly executed vessels to carry out that severance.

With The Woman having been met with so much controversy and Lucky McKee being scrutinized for his feminist films being ironically disguised as “anti-feminist”, McIntosh’s Darlin should serve to support McKee’s intent as well as the general intent of feminist portrayal. McIntosh uses the story of Darlin’ to reconstruct the way we look at the subjugation of individuality and nature. In the effort to see this representation as more than gratuitous violence against female characters, McIntosh keeps McKee and Ketchum’s story running fluidly and guides it by planting her own relevant obstacles and bends on a variety of social commentaries.

So many viewers miss the interpretive art behind the stories of The Woman’s journey that I can only hope Darlin’ dilutes some of the boundaries inflicting preconceived notions and uneducated expectations as to what the violence and negative actions of these characters are truly meant for. Darlin’ refuses to play dead, but instead attacks the same subjects of injustice head-on with the inspiration and foundation of McKee and the power and drive of McIntosh. Like Offspring and The Woman, Darlin’ needs to be looked at not so much as a literal story, but a meaningful one.

These characters who inhibit teenage pregnancy, addiction, homosexuality, even homelessness are all treated as pariahs met with hostility by those who conspire to bring them down or acclimate them to their desired culture, but McIntosh leads a crucial crusade forward through the carnage of defeat as a beacon of hope for mother nature.

Darlin’ opens the door cracked by The Woman to include the many minority groups that fight against conversion and injustice daily. The Woman moves through the hospital in search of Darlin’ with ease destroying all archetypes of threatening men with ease: the doctor, the cop, the clown. Canny, as Darlin’, inhibits incredibly authentic feral behaviors, primal movements, and innocence. Her acting is haunting and really compliments that of McIntosh as the seasoned Woman of this series and Nora-Jane Noone as the recovering Sister Jennifer who struggles to blow the whistle on the church’s wrongdoings. Cooper Andrews is an absolutely delightful addition as a nurse who empathizes and understands Darlin’ and her erratic, free nature. As a gay man, he too struggles with the indecencies, punishments, and pressures of an unjust world. The young women of the Catholic reform school all display secular rebellion, forming a heartwarming bond with Darlin’ through their behaviors. These characters who inhibit teenage pregnancy, addiction, homosexuality, even homelessness are all treated as pariahs met with hostility by those who conspire to bring them down or acclimate them to their desired culture, but McIntosh leads a crucial crusade forward through the carnage of defeat as a beacon of hope for mother nature.

The same way there may be criticisms drawn on the treatment and portrayal of women in this series, there are those who may pass judgement on a group of women living like feral animals middle of the woods away from structured society. McIntosh’s Darlin’ is a wild continuation of a story born of violence and intolerance, but I think its most important contribution is the way it shows that The Woman’s story is not complete, and her influence will always live on. The Woman continues her perseverance through the subjugation of man and the institutions created to protect him. While there are many casualties and quitters along the way, Darlin’ serves as further as a message that one thing girls should be exempt from are expectations.

Darlin’ continues the story and vision of The Woman by incorporating more established institutions of reformation and conversion that threaten not only women, but all groups born of rebellion and differences. Pollyanna McIntosh respectfully refuses to fill in the shoes of Jack Ketchum and Lucky McKee, but allows Darlin’ to become hers and hers alone through her expressive, but remarkably controlled sense of style and direction. 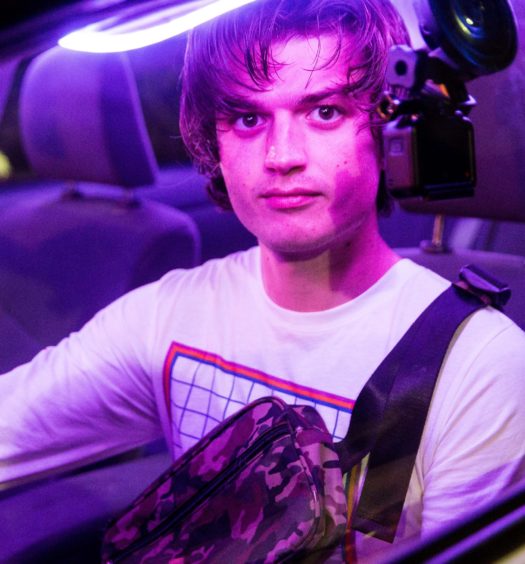