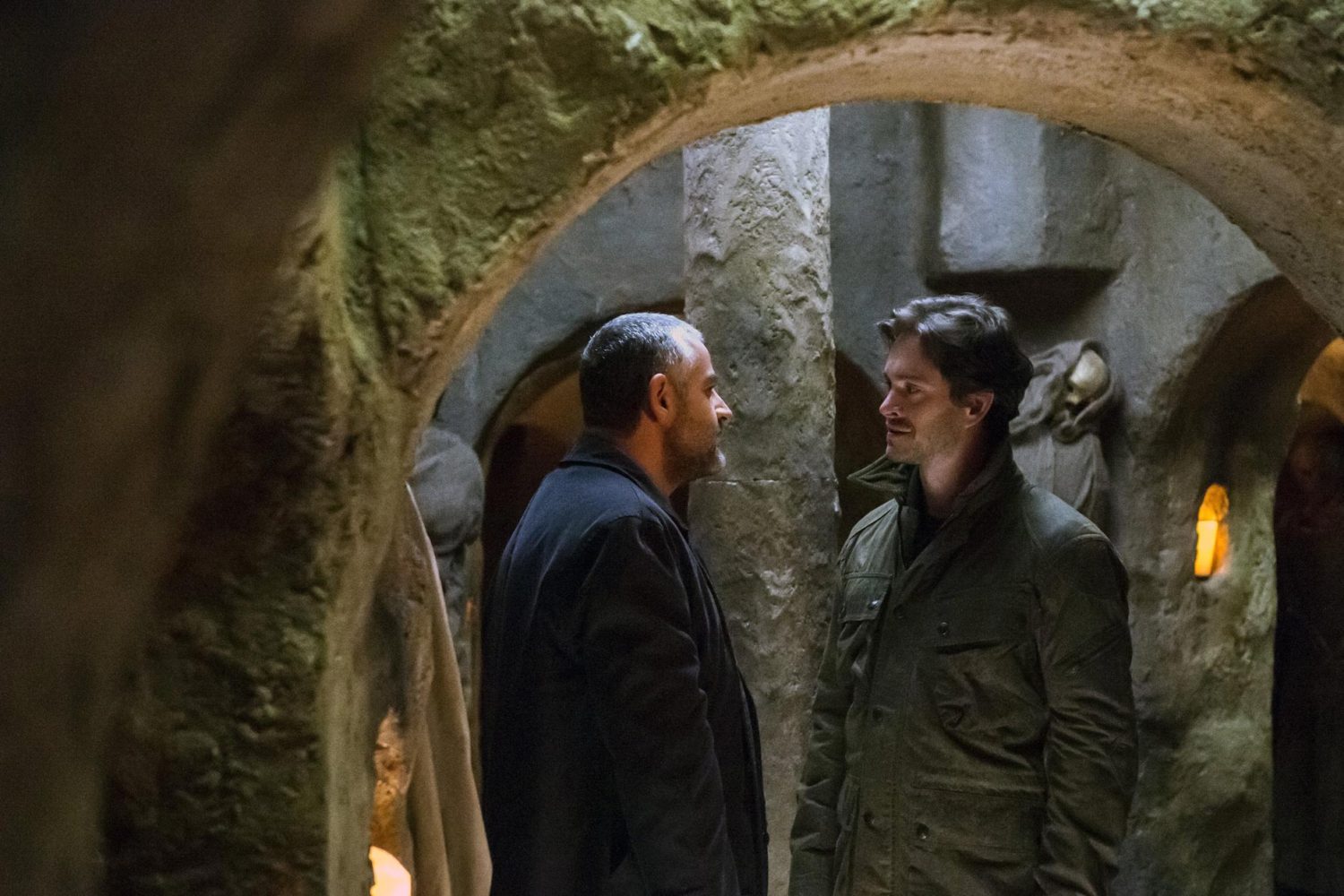 Last week’s Season Three premiere of Hannibal had no Will Graham (Hugh Dancy); this week’s episode has precious little of its titular character, although his influence and presence are both keenly felt throughout. “Primavera,” which show creator Bryan Fuller called #SCREAMAVERA on Twitter, was, like its namesake, something of a Spring-like rebirth for Will Graham.

Opening with a literal flood of blood and an enhanced ending to the Grand Guignol of Season Two’s finale, “Mizumuno,” we witness Will, much like Bedelia, nearly drowning in an ocean. Unlike Bedelia, however, Will manages to escape, gaining consciousness in a hospital room that looks eerily like one we’ve seen him in before. A doctor appears and asks Will how he feels. “Thirsty” is the unironic reply. The doc hands him a plastic cup with a straw (no ice chips?) and informs him that someone’s been anxious to see him.

In walks Abigail (Kacey Rohl), the surrogate daughter who couldn’t die. There’s a conversation between the two victims, but it all seems a little strange and a lot philosophical. Will asks, “After everything he’s done, you’d still go to him?” Abigail nods “yes.” Then Will is dreaming of his stomach wound bleeding, the stitches torn asunder from within, by what looks like a stag antler. So maybe the Ravenstag can’t be killed, either.

Will, dreaming, watches himself and Hannibal in Hannibal’s study from last season, when the not-so-good doctor lovingly describes his mind palace. One of Will’s distorted clock drawings is on fire, an indication that time is irrelevant in a mind palace or more importantly, irrelevant to the relationship between Will and Hannibal. Underneath the papers cascading to the floor, Will discovers a skull that looks just like the one on the floor of the Capella Palatina in Palermo, Italy. Then “8 Months Later” appears on the screen and we know just where Will Graham is going.

Strolling slowly through the Palazzo dei Normanni, Will insists that God’s not who he came to find, pointing out the differences between the Creator and Hannibal to an extremely skeptical Abigail, who has apparently accompanied him to Italy. “We all know G dash D won’t do a G dash D damn thing to answer anybody’s prayers,” she remarks, sounding cynical and wise beyond her years. Still, Will insists that to God, “elegance is more important than suffering.”

If this locale looks familiar, it’s because it’s exactly where Hannibal left his flesh valentine in last week’s episode. Perhaps he wanted Will to find it, but now the place is swarming with cops and cordoned off with yellow tape. One of them instructs Will to leave but another beckons him to stay. This can’t end well, considering Will’s history.

At the local police station, Will sits on a bench waiting. The man next to him introduces himself as Inspector Rinaldo Pazzi from Florence (the velvety-voiced Fortunato Cerlino). It’s a bit of a tense conversation, despite the fact that Pazzi seems to be somewhat of an avid fan of Will, at least enough to know that Will was tried for a series of atrocious yet artful murders back in Baltimore.

Pazzi remarks that the priest at the Capella Palatina has seen Will hanging out there an awful lot lately. Pazzi doesn’t realize is that Will is just looking for his Murder Husband and Will doesn’t bother to educate him. He tries to bond with Will by explaining that they “share the gift of imagination.” Will, ever awkward, tries to leave, but Pazzi drops a serious truth bomb by showing him a crime scene photo from 20 years before: two murder victims arranged to look like Botticelli’s Primavera, specifically Chloris and Zephyrus.

Will doesn’t bat an eyelash, but we know he knows this is Hannibal’s work as surely as if he’d signed the photograph himself. Pazzi isn’t done. He calls the murderer “Il Mostro” and shows him a photo of a 20-years-younger Hannibal Lecter. Again, no response from Will Graham, who is probably thinking “DAMN I WOULD SO HIT THAT” but seems awfully cagey about whether or not Il Mostro is Hannibal Lecter. Then Will and Pazzi are back at the Capella Palatina and Pazzi is explaining how uncovering Il Mostro’s identity made him famous but then ruined him because he destroyed Il Mostro’s home looking for evidence but couldn’t find any. Perhaps he’s praying Will can relate to this kind of situation.

The previous two seasons of Hannibal have often played fast and loose with Thomas Harris’s text, much like the way Todd Haynes’s Velvet Goldmine did with David Bowie and the history of 1970s Glam Rock. This is partly due to Bryan Fuller’s evil genius, but also because he doesn’t have the rights to any of the characters or plots from Silence Of The Lambs, which MGM has held within their tight little fists for the last several years. (That may soon be changing. WARNING: SPOILERS)

Season Three, however, is dovetailing quite nicely with Harris’s third book of Lecter novels, the controversial Hannibal, but because Fuller loves to reimagine things, now Will Graham is involved. Pazzi hands Will a manila folder full of photos and then leaves and before long, Will is doing that voodoo that he do so well: empathing. He circles the flesh valentine. “I made you malleable,” he notes, a.k.a. “twisted you into all sorts of uncomfortable positions.” It’s “a valentine written on a broken man,” Will remarks and once again, Fannibals everywhere squeal with delight. My Bloody Valentine, indeed.

Then, in an absolutely riveting yet revolting scene, the flesh valentine untwists itself and sprouts hooves, lurching towards Will at a frightening pace. Bryan Fuller called this #STAGENSTEIN on Twitter, while storyboards referred to it as “Stumpman.” I like to call this new monstrosity, “Cronenstag.” It is Abigail who breaks Will’s reverie. If ever anyone laughed ruefully, it’s Will Graham in the next moment when he says, “I do feel close to Hannibal here. God only knows where I’d be without him.” Middle-aged symphonies to the Devil, perhaps?

“You still want to go with him?” Will asks Abigail. “Yes.” “What if we all left together like we were supposed to?” Will wonders.” Where would we have gone?” Some other world? (Massachusetts, maybe?) A place wasn’t made for Abigail, however. “In this world, this was the only place I could make for you.” Will states sadly.

Then the Fannibals cry a river of tears that make the ocean at the beginning of this episode look like a puddle by comparison when we realize that Abigail is just a guest in Will’s own mind palace. We should have guessed sooner: Abigail speaking like Will, wearing a jacket that looks like it’s been soaked in blood.

Will Graham: Forever Alone. Or is he? Hannibal is watching from the wings, his face a mask.

A sequence of astonishing cross-cutting (pun intended) follows, showing Abigail being prepped for the grave, while Will is being prepped for life, albeit one without Abigail or Hannibal, who put him in this uncomfortable position in the first place. It’s one of the more emotionally devastating sequences in a show filled with devastating sequences, especially when it’s set to Gabriel Fauré’s “Pie Jesu.”

Pazzi returns. “Are you praying?” he asks Will. “I think my prayers would feel restricted by the saints and the apostles.” (So Will is a Protestant, I guess.) A glance at the doors towards the Catacombe dei Cappuccini shows an encroaching pool of blood and Will tries to warn Pazzi away lest he be caught and killed.

Will travels down into the catacombs where mummified Capuchin monks lurk like the Knights Templar in The Tombs of the Blind Dead. This dark, cavernous place looks like the folded tissue of a brain, perhaps the one that Will and Hannibal seem to share. Pazzi follows behind him with a gun (silly Pazzi; guns don’t work on Hannibal Lecter). “You don’t know whose side I’m on” Will tells him.

Will doesn’t have encephalitis anymore; there are no more fevered dreams to confuse reality and fiction. There’s no sting operation, no Jack Crawford or Kade Prurnell calling the shots. Will is there of his own volition  “You still want to go with him?” he had asked Abigail twice earlier, a question to which the response was always “yes.” Now we realize that Will is asking himself this question and answering in the affirmative. The realization is both heart-wrenching and horrible. But it’s Hannibal Lecter, Murder Husband extraordinaire. We totally get it.

For the first time ever, Will calls Hannibal by his first name. He knows he’s there waiting in the catacombs and he’s right. We see Hannibal listening and following Will, just eluding sight and capture. “I forgive you.” Will calls out. And we know he means it. The thing that’s most disturbing is that we forgive him, too. Will has been reborn into a world where Hannibal can slice him up and kill the most second most important person in the world to him and somehow everything is OK. 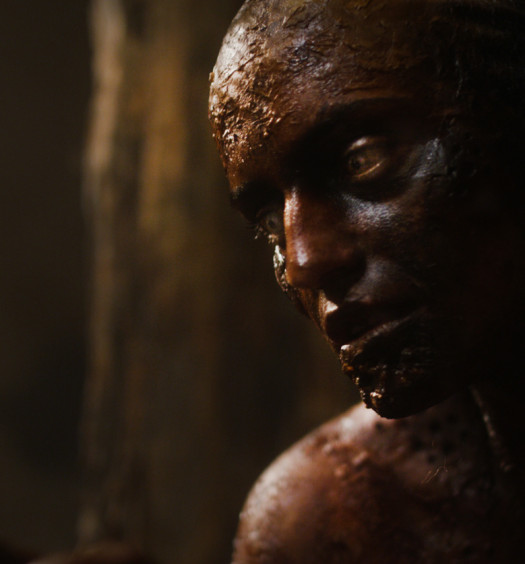