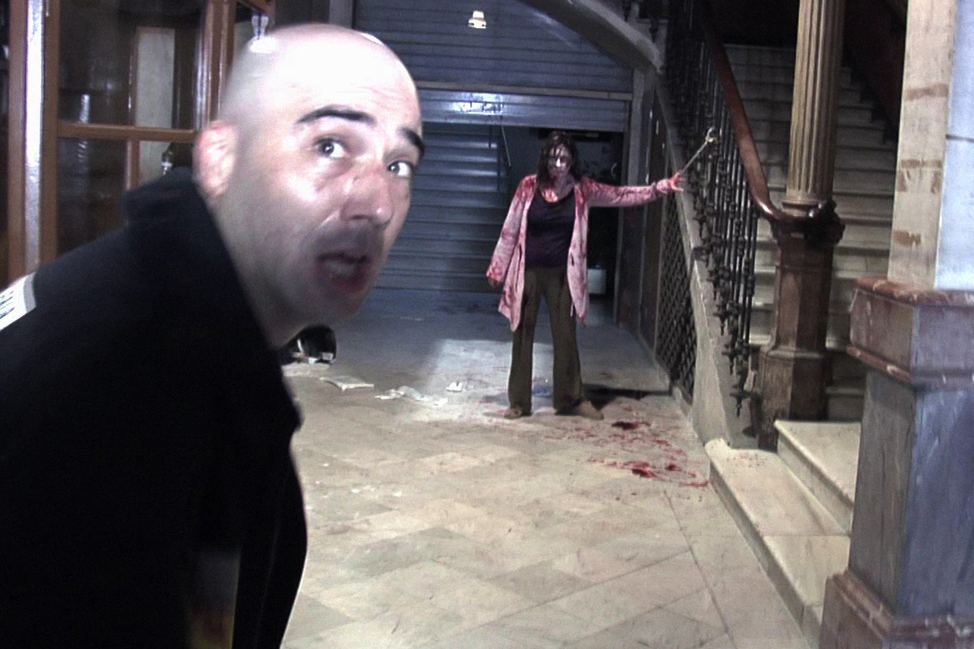 2007’s [REC] is a modern classic and has spawned at least 3 sequels.  The Spanish language film follows a news crew just doing a fluff piece on firefighters, when shit hits the fan.  There are plenty of scares to get you cozy, and with the multiple sequels, [REC] might just spawn an all-nighter for you… or at least a few more dates.

Tinto de Verano is a classic cocktail from Spain.  Sure, Verano means Summer and it is now Fall, but the temperature is still hitting the high 80’s, so fuck it!  You don’t need much for this delicious and refreshing drink.  Just pour some ice in a glass, fill it half with lemonade and half with red wine (preferably one from Spain), top with some lemon slices and you are in business!  This drink will have you all set to enjoy [REC], and your date will think you’re worldly pairing a Spanish film with a Spanish cocktail…win/win! 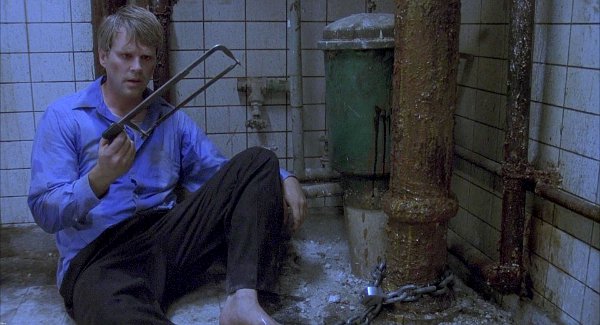 There are a few people who have lived under rocks who may not have seen SAW.  There are even more people who haven’t watched it in years!  With JIGSAW hitting theaters later in October, you’ve got to prepare!  SAW launched the career of James Wan, so why not pay tribute to a modern master of horror by watching the movie that put him on the map?  Still not ready to say goodnight?  You’ve got loads and loads of sequels to enjoy!  Sure, the gore fest might not be what you had imagined for a date, but maybe if you play your cards right you’ll be able to play a game for the chill in HORROR AND CHILL.

If you’re going to watch SAW, you need a drink to match.  I hope you like orange because you’re going to be drinking the HACKSAW!  This isn’t a complicated cocktail, but damn is it tasty.  Just mix 2 shots of vodka with equal parts orange juice and orange soda and you are on your way to a hell of a good time.  If you plan to watch more than just the first film, maybe add a bit more of the juice and soda for each drink.  Or don’t…I’m not your mom. 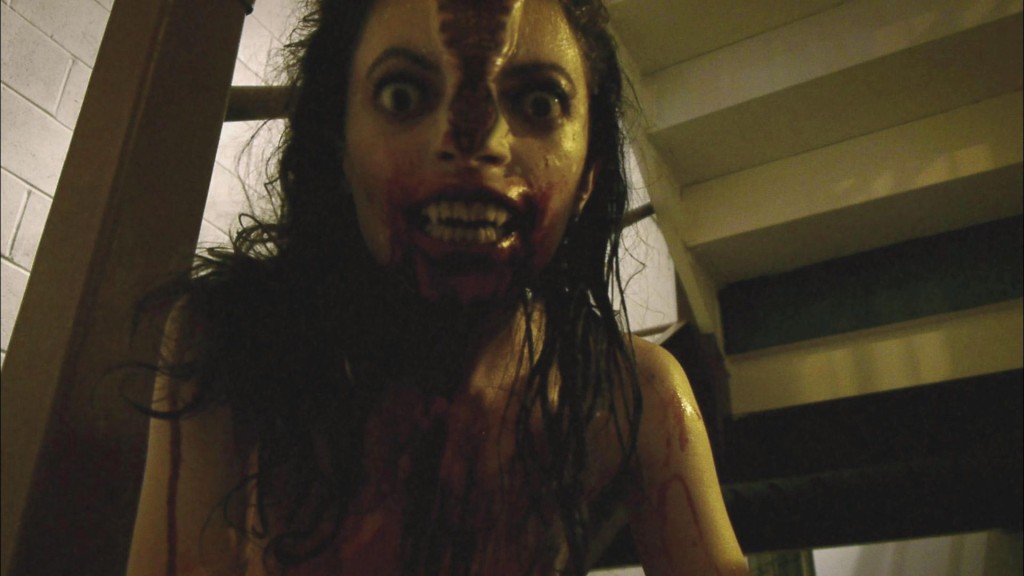 Most horror fans have fond memories of picking up the latest release, and old favorites, on VHS from Blockbuster or Hollywood Video.  My local small town rental shop offered 8 for 8 for 8 where you got 8 movies for 8 days for 8 dollars.  I loved it and picked up film after film.  V/H/S is all about those tapes.  Found footage just seems so much creepier when you’ve got to rewind it after.  Oh, did I mention there are sequels (are we sensing a theme here?)?  V/H/S 2 is just as good as the original and the 3rd one is a movie.  There are some really great stories here and you’ll definitely get some snuggle action, for protection of course.

Have I told you to drink beer yet this week?  Nope.  Drink beer.  If you have a local microbrew, go out and support them!  If you don’t, just pick up your favorite six pack, grab one for your date, and enjoy those delicious malted hops as you watch V/H/S! 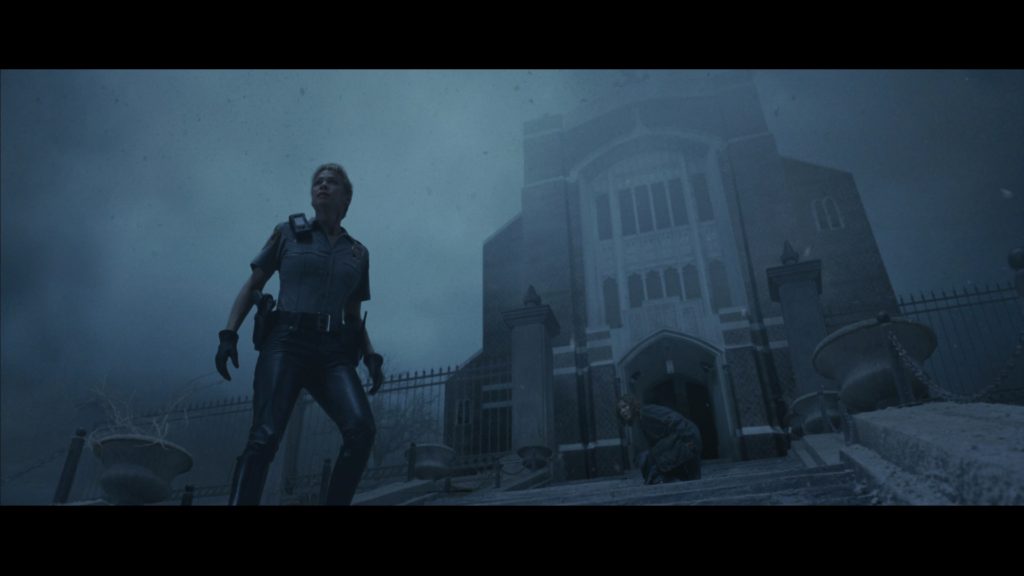 SILENT HILL proved that all video game based movies don’t have to suck!  Not only that, but there is a sequel!  There is enough creepiness here to keep you firmly in snuggle town for at least the 2 hours of the film, if not longer.  Sure, you’ve only got one sequel to utilize here, but I’m sure you can think of a way to get to chillin’!  Plus, you can prove that Sean Bean doesn’t die in every single movie he is in.  Make it a bet, if Sean Bean lives, you get a kiss.  I’ll leave it there…I’m not going to do everything for you.

For SILENT HILL you’ll be able to drink whatever you want.  But, you’ll also be playing a drinking game!  Pour a big ol’ glass of your favorite libation and makes sure you take a drink when: 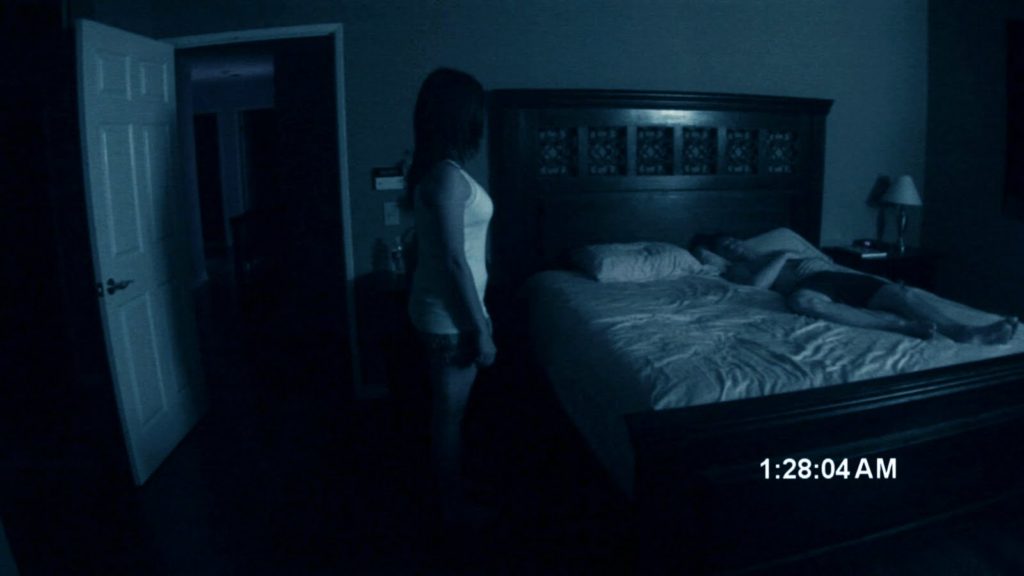 PARANORMAL ACTIVITY is a series with a lot of ups and downs.  None of the movies was bad, but there is definitely a quality difference.  However, there is no denying that the original PARANORMAL ACTIVITY resurrected the found footage sub-genre and got people excited about horror again.  You have a decision to make now… do you watch all these movies in one sitting, making it an all-nighter and sleepily go out to breakfast in the morning?  Or, do you space it out into multiple HORROR AND CHILL nights?  I guess that depends how much you like each other after being terrified by a woman staring at a man sleeping for hours and hours.  Either way, you’ll have a really good time.

For at least your first night of PARANORMAL ACTIVITY films, you’re going to enjoy a nice whisky sour!  Don’t like whisky?  Go ahead and switch out the whisky for amaretto!  Either way, you’re getting a delicious drink, a good buzz, and a great film.  You can buy sour mix ready made, but if you want to be a bit more fancy, here is a recipe!

Pour all ingredients into a cocktail shaker and fill with ice.  Shake hard for at least 10 seconds.  Strain into a glass and garnish with a cherry.  Enjoy.

Volume 8 is here and gone!  The next HORROR AND CHILL finishes up September, so you know what that means… actually you don’t.  You’ll just have to stop by MODERNHORRORS.COM to find out!  Make sure you let us know on Twitter and Facebook that you’ve been up to some #HorrorAndChill!  Seeya next weekend for more movies, more drinks, and more good times!