Canadian filmmaker Larry Kent has been making independent movies since the 1960s. The Bitter Ash, originally screened at universities in 1963, caused such controversy for its fleeting depictions of sex, drugs, and nudity that it was banned and remained virtually unknown and unseen until retrospectives of Kent’s work started popping up in the early part of this millennium.

You might think that someone making films for five decades would eventually mellow, turning towards more “distinguished” fare. But at 82 years of age, Larry Kent shows no signs of that; She Who Must Burn is a visceral and confrontational film that tackles an extremely polemic topic: a woman’s right to choose.

Angela (Sarah Smyth) is a counselor at a women’s clinic in a small rural town. When one of the doctors at the clinic is shot and killed by a Christian pro-life terrorist named Abraham Baarker (James Wilson), the state pulls the clinic’s funding. Angela refuses to stop providing her services; her partner, police officer Mac (Andrew Moxham), supports her decision. Unfortunately his boss, the local sheriff, does not. And neither do most of the townspeople, including the remaining members of Abraham’s flock – Jeremiah, Caleb, and Rebecca – who continue to hold loud protests in front of the clinic condemning Angela’s efforts. When Angela provides assistance to a battered wife who seeks her help, things get even uglier.

She Who Must Burn is a film that does not fit comfortably into any genre. It’s a deadly serious drama that plays out like a horror film. No one would question the narrative validity of a film depicting the nefarious activities of a cult of devil worshipers who harass, stalk, and murder people, but in a drama like this it often feels like hysterical melodrama. If you approach She Who Must Burn like a 1970s cult-themed horror film (think Race With The Devil or The Brotherhood of Satan) however, it makes complete sense.

The histrionic behavior of Jeremiah and his crew might seem unreal, yet a quick perusal of the history of pro-life terrorist acts reveals that such characterizations aren’t that far off the mark. With the exception of Todd Solondz’s 2004 film Palindromes and John Carpenter’s Masters of Horror film Pro-Life  from 2006, however, there are few fictional films which focus on the violence that surrounds the pro-life movement. This makes She Who Must Burn an important film; its genre trappings make it even more unique.

Yes, the villains in the film come across as outrageously evil, but the good guys seem utterly normal. Angela and Mac seem like regular people who stand up for what they believe in. The Sheriff is the most troubling character in the film. He knows that what Jeremiah and the others are doing is not only illegal, but also morally repugnant, yet he doesn’t try to stand up to them. In some ways, he’s a bigger villain. That’s where the heart of She Who Must Burn resides and what makes it a distinctive and significant horror film. There is no big supernatural reveal; no masked serial killers come back from the dead and disappear. The horror is all in the reality and gravity of the situation that plays out on screen.

Visually, it’s a gorgeous film; Kent and DP Stirling Bancroft used a handheld camera to capture a cinema verite vibe, and your appreciation of this will depend on your tolerance for shaky camera work. Regardless, the shot composition and use of color is exquisite, and gives She Who Must Burn an immediacy that resonates beyond its subject matter. It’s also a film that might make you angry that this is the world in which we now live and that people like the Sheriff are the norm and not the exception.

She Who Must Burn premiered at the Fantasia International Film Festival in July and is set to screen at Toronto’s Blood In The Snow film festival in November. 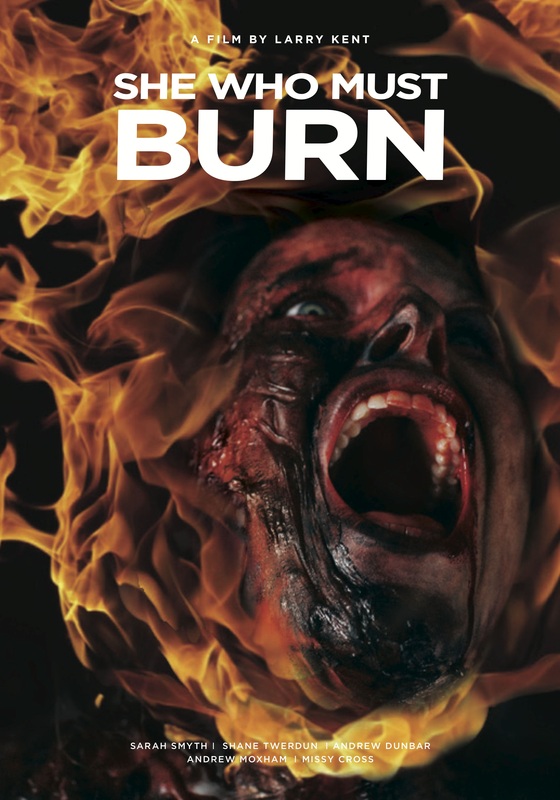 She Who Must Burn is a visceral and confrontational film that tackles an extremely polemic topic.

Larry Kent Movies Reviews She Who Must Burn