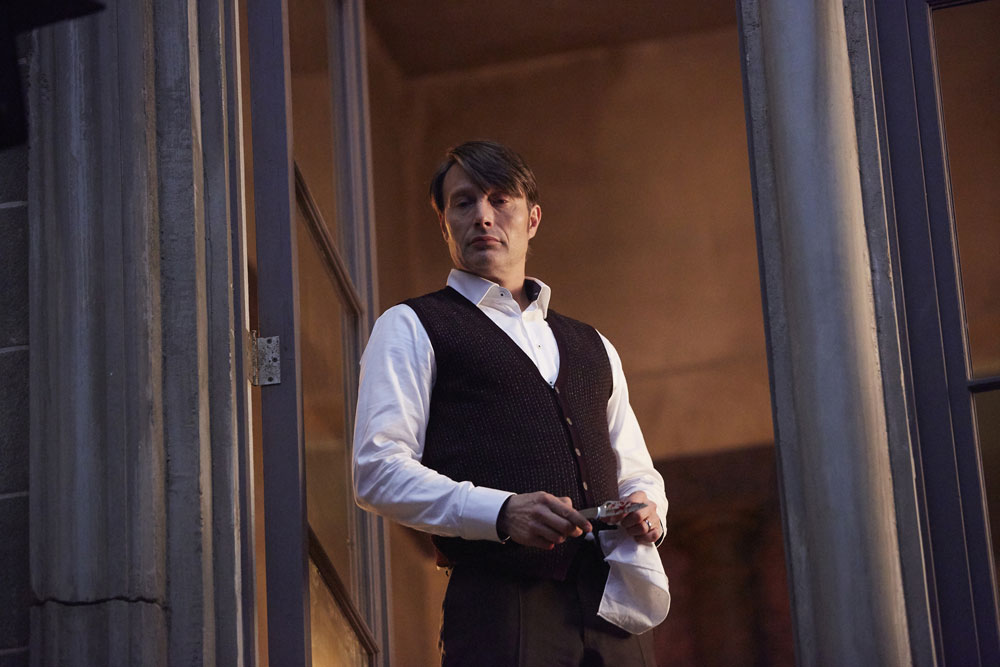 It was a stressful week for Fannibals; last Monday’s it was announced that NBC was canceling the show and this week it was revealed that the network had not renewed the contracts of both Hugh Dancy and Mads Mikkelsen, leaving many to wonder if this was the final nail in Hannibal‘s coffin.Yet, as this Vox article points out, all is not necessarily lost.

Despite this news, it was difficult to not luxuriate in the excitement of Mikkelsen’s hilarious (and bloody) cameo in Rihanna’s video for “Bitch Better Have My Money,” which must be seen to be believed. Above all else, this week’s episode, “Contorno,” proved to be another wild ride from Bryan Fuller and the cast, showing us that even when they’re apart, Hannibal Lecter and Will Graham can’t stop having similar experiences.

“Contorno,” means “side dish” but in the context of this episode, perhaps it also refers to “side piece.” Yes, they may not be physically together, but Hannibal and Will are most certainly psychically together, no matter what kinds of other romantic entanglements they might be exploring.

Chiyoh and Will are strangers on a train, traveling towards Hannibal in Italy and having their own reasons for doing so. Chiyoh compares him to a wild animal: “He’s charming the way a cub is charming. A small cub who grows up to be like one of the big cats.” Will adds, “One you can’t play with later.” Me-ow.

Will projects his own fantasies of killing Hannibal onto Chiyoh, but she clarifies that she sees Will killing Hannibal over and over. This is met with a rare smile from Will (and probably a murder boner). Chiyoh’s explanation of how snails will sometimes travel the world while undigested in the stomachs of birds might seem a bit odd, but it’s an apt metaphor, especially when Will characterizes it as residing “in the belly of the beast.”

More snails appear as Hannibal, still in Italy, describes how firefly larvae feed on them and how he collected them for this specific purpose in his youth. Of course, many viewers stopped paying attention as soon as they noticed that Hannibal was shirtless, Bedelia was clad in a negligee, and they looked, to borrow a word from Will Graham, decidedly intimate. That they are Doing It was confirmed in a tweet from Bryan Fuller. Hannibal drops some relevant info, describing how the snails would provide the fireflies with a “transformation into a delicate creature of such beauty.”

He may be telling Bedelia this, but we can’t help recall his statements to Will from last season’s “Su-Zukana”: “I can feed the caterpillar, whisper through the chrysalis, but what hatches follows its own nature and is beyond me.”

We reconnect with Jack Crawford, now in Italy to say a final goodbye to Bella in the place where they said their first hello. He tosses her ashes over a bridge and throws his wedding ring in for good measure. It must have lifted a huge weight from his shoulders, because he next shares wine and lighthearted conversation with Inspector Pazzi and his wife over Pappardelle alla lepre (broad strips of pasta with cooked hare). It’s not totally innocent; they are also discussing how Pazzi wants to catch Lecter. Jack warns him about his own bad experiences going outside of the law.

Speaking of dinner, Alana has been stealing Hannibal’s fine china, silverware, and linens from his house and is identifying them to a rapt Mason Verger. In this case, she’s showing off Hannibal’s exquisite collection of Christofle and Tiffany pieces and discussing how they can be used to find him. The following lines from Mason Verger were so sleazy that I can scarcely believe NBC Standards & Practices approved them.

THIS LINE AIRING ON NETWORK TELEVISION IS AS AMAZACRAZY AS ANY CORPSE OR MURDER. #Hannibal pic.twitter.com/wpOHRrJe2d

It doesn’t hurt that as Mason, Joe Anderson sounds like Jimmy Stewart, albeit if Stewart was a deformed creep who liked to beat up his sister and drink tears. Bravo Mr. Anderson.

Alana isn’t done. Seems Hannibal’s penchant for Bâtard-Montrachet wine and “tartufi bianchi” (white truffles) haven’t gone unnoticed, even if it’s a “blonde woman” who is purchasing them from Vera Dal 1926 and not Hannibal himself. It’s another connection between Clarice Starling and Alana Bloom, as this is how the former tracked Hannibal down in the book

Back on the train, Will lies in his bunk and stares at the ceiling as Chiyoh wonders if they are obligated to talk. Even though Will says, “no,” she seems chatty. He confesses, “Hannibal and I afforded each other an experience we may not otherwise have had” (AHEM) and confirms that if he doesn’t kill him he may become him. “There are means of influence other than violence,” is all she can say.

Pazzi visits Hannibal, I mean Dr. Fell, at Lo Studiolo, trying to be sneaky, but the expression on his face when he makes eye contact gives away his not-very-long game. Hannibal doesn’t offer much information on Fell’s missing predecessor or Sogliato, but he does connect the Inspector to his infamous family, in another homage to history and Harris’s text. Pazzi is only human: he calls Mason Verger’s Have You Seen Hannibal Lecter Hotline and is strongly urged to consult an attorney.

Whilst playing Mozart’s Piano Sonata No. 13 on the piano, Hannibal remarks to Bedelia that he prefers the harpsichord because “piano has the quality of a memory,” in this case, his memory of Pazzi and Hannibal’s own ability to make murderous art out of Botticeli’s Primavera. “Does he know what you are?” asks Bedelia, but what she should have asked was, “Hannibal, why on earth are you wearing that godawful shirt?” Hannibal doesn’t seem worried because a bounty on his head is “better than radar.”

After a dream where Chiyoh, impaled on antlers, is bleeding onto him, Will discovers that she’s at the back of the train, watching the tracks disappear. When Will wonders why she didn’t tell him that she knew Hannibal was in Florence until now, she kisses him, and reminds him of other influences besides violence. “But violence is what you understand,” she says, as she pushes him off the train in the ultimate mic drop. The Ravenstag appears like Aragorn’s horse Brego to nuzzle Will awake and lead him down the tracks, presumably to Hannibal.

Now Mason and Pazzi are video chatting about that $3 million reward and Mason insists on a current fingerprint as proof. Alana walks into view, asking Pazzi if he’s OK with “selling Hannibal into torture and death.” Pazzi, who must be getting antsy after 20 years of waiting, goes back to Lo Studiolo with a gift for Hannibal: a scold’s bridle that was used on Pazzi’s own ancestor Francesco di’ Pazzi as a torture device. He spies the thumbprint on the knife Hannibal was just using to slice an apple, but before he can snatch it, Hannibal announces he has a “family heirloom” for Pazzi.

It’s a wood carving that shows Francesco with his “bowels out” (as well as the bite mark where the Archbishop bit him on the shoulder) after Old Pazzi’s family plot to murder the Medici family back in the day was revealed, before Francesco was hung and disemboweled. Without blinking, Hannibal looks Pazzi dead in the eyes: “By all accounts Francesco was led astray by 30 pieces of silver from the papal banker.” Um, dude, I think he’s onto you. He walks away as Pazzi tries again for the knife, but suddenly attacks him from behind.

A gleeful Hannibal wheels Pazzi, now strapped to a dolly with duct tape over his mouth, towards a window and prepares a noose from electrical cord. “I haven’t had a bite all day,” he chortles (more dialogue straight from the novel). Pazzi communicates with a nod that he sold Hannibal out to Mason Verger and then his phone rings. “I know your benefactor,” Alana says, not realizing it’s Hannibal she’s talking to. But Hannibal does. That awkward moment when you call a cop and your ex answers the phone before he kills him is taken from the film version of Hannibal.  “Bowels in or bowels out?” Hannibal asks, but decides to slash Pazzi’s stomach right before he pushes him outside.

Pazzi’s not alone out there; Jack Crawford is watching. Hannibal waits upstairs for him, asking “what medication did you give Bella in the end?” in a disturbing display of psychic power.

In a move that should surprise no one, but definitely surprises Hannibal, Jack sneaks up behind him in sock feet (Hannibal, you just got Hannibal’d) and gets the jump on him. Another glorious fight scene ensues, although Hannibal gets his ass kicked, in what cast member Aaron Abrams is calling “The Scrappa in the Piazza.” Must be all those snails and truffles slowing him down.

A bloody, beaten, but still snarky Hannibal crawls to the window and gives Jack his ultimate bitch face as he asks, “How will you feel when I’m gone?” Jack grins: “Alive.” Like a boss, Hannibal uses Pazzi’s body to escape before he stumbles away. That’s how you end an episode, folks.

Admittedly, we don’t know if the show will continue past this season but we do know that there will be way more bloodshed. After all, Hannibal and Will haven’t been face to face in a while and they’ve got a lot of catching up to do.